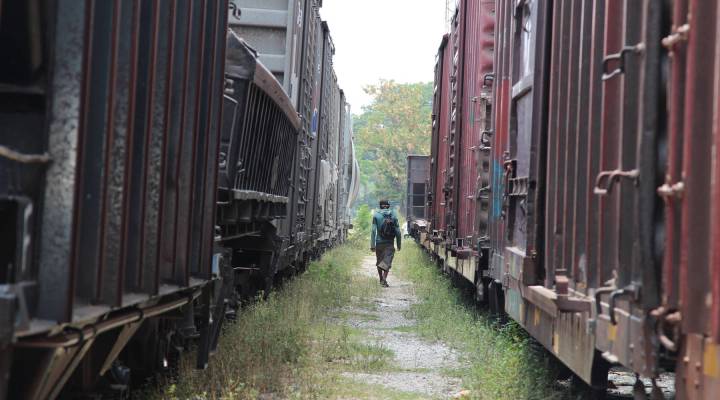 COPY
Migrants transiting Mexico once depended largely on a series of trains known collectively as La Bestia (the beast). Following raids on the trains that began in 2014, migrants say they walk long distances in the Mexican interior to avoid mobile and fixed checkpoints. Lorne Matalon/Marketplace

Migrants transiting Mexico once depended largely on a series of trains known collectively as La Bestia (the beast). Following raids on the trains that began in 2014, migrants say they walk long distances in the Mexican interior to avoid mobile and fixed checkpoints. Lorne Matalon/Marketplace
Listen Now

In 2012, a senior official in the U.S. Department of Homeland Security declared that Mexico’s southern border with Guatemala was now essentially the southern border of the United States.

That was two years before the 2014 child migrant crisis that saw tens of thousands of unaccompanied children from Central America crossing or attempting to cross into the U.S. from Mexico. Since then, the U.S. has expanded its own border enforcement efforts by assisting Mexico on its southern border. In 2015, fewer Central Americans reached the U.S., though the numbers vary from season to season.

Migrants from Honduras and Nicaragua inside a safe house in Veracruz. They’ve been here for more than a month with other migrants from Guatemala.

This border is porous even after the U.S. pressured Mexico to start Programa Frontera Sur, its southern border plan, in July 2014.

The plan was crafted after President Barack Obama said the unprecedented numbers of unaccompanied children and families arriving at the U.S. border in the preceding months constituted an “urgent humanitarian situation.” The United Nations high commissioner for refugees later warned of a “looming humanitarian crisis in the Americas.”

After being prodded by Washington, Mexico sent at least 300 immigration agents from other parts of Mexico to the south, raided trains and migrant hostels and set up mobile checkpoints. Washington is supporting this campaign with training, technology and intelligence. Despite that support, people and goods cross freely at numerous places along Rio Suchiate, the river that marks a large section of the Guatemala-Mexico border.

The bridge links Talisman, Mexico, on the right, and El Carmen, Guatemala. There are agents from both nations stationed on the bridge. Below the bridge, people cross back and forth unbothered by authorities.

I met Carlos Mejia at Ciudad Hidalgo, Chiapas State, Mexico, located opposite Tecun Uman, Department of San Carlos, Guatemala. He was one player in a scene that resembles a human ant farm. He lives in Guatemala but he commutes on a raft into Mexico each day. He is part of a huge, unchecked, floating black market of under-priced goods that are transported, in his case, into Guatemala, commodities that are purchased in Mexico and then brought unregistered into Guatemala.

And it all takes place a few hundred yards from a legal border crossing — a bridge that spans the river — that is staffed by authorities from both nations. Authorities turn a blind eye. The same is true at other border crossings, including another bridge nearby.

Mexico commenced its southern border plan, Frontera Sur, in 2014. Here, people cross the Rio Suchiate, which separates Guatemala and Mexico. This section of the river is less than 30 yards from the official border crossing.

“Any of these days the police or the government try to come and close this, there’s going to be a big trouble,” Mejia said, explaining that thousands of people depend on this informal market to make a living.

He said he’d been deported from the U.S. after living in Maryland, Pennsylvania and South Carolina, where he said he’d worked as a waiter. He said he had come here to leverage this lucrative no man’s land, a wide-open river on a heavily-crossed border, the choke point in Central America for migrants heading north, and just about everything else — food, oil, weapons — moving both ways.

The U.S. interest in this unfettered and illegal trade has to do with immigration control. Human beings as well as cargo cross this river. But Mexico has not moved to seal this border the way the U.S. has on Mexico’s northern border with the United States.

A man prepares corn for delivery to Guatemala from the Mexican side of the river. The black market traders say trouble would ensue if authorities attempted to stop these illegal crossings.

“There are some pretty fundamental disagreements right now about how deeply the Mexicans want the United States involved in the southern border,” said Adam Isacson, a security and border policy analyst at the Washington Office on Latin America (WOLA), a leading research organization focused on the Americas.

Isacson said the laissez-faire attitude on the river is a perfect example.

Washington has committed at least $100 million to support Mexico’s southern border program since 2014. As of February 2016, $20 million has been delivered.

In the case of migrants who cross Rio Suchiate into southern Mexico, if they make it past the border and into the Mexican interior, they must run a gauntlet, an alphabet soup of Mexican law enforcement agencies including immigration, police and the army. Yet thousands of migrants appear undeterred, using Mexico as a trampoline to the U.S. and often crossing on rubber rafts that bring cargo to either side of the river every day and night.