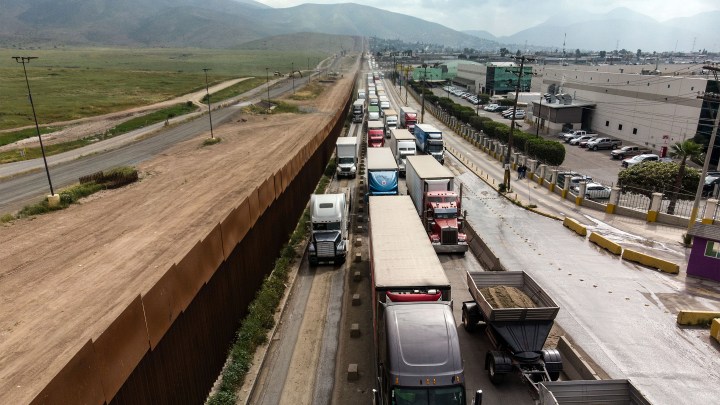 COPY
Cargo trucks line up to cross into the U.S. at the Otay Mesa crossing port in Tijuana, Mexico, in April. Guillermo Arias/AFP/Getty Images

Cargo trucks line up to cross into the U.S. at the Otay Mesa crossing port in Tijuana, Mexico, in April. Guillermo Arias/AFP/Getty Images
Listen Now

Officials from the United States and Mexico continued negotiations Thursday in an attempt to avert new U.S. tariffs on Mexican goods.

President Donald Trump said he would impose a 5% tax on all imports from Mexico on June 10 unless Mexico agrees to measures that would stanch the flow of Central American migrants into the United States.

The prospect of pop-up tariffs hitting everything coming across the border has the people who work in the export-import trade worried.

“Everybody in the supply chain right now is reeling. We are so unprepared for it,” said Amy Magnus, president of the National Customs Brokers & Forwarders Association of America.

She said the U.S.-Mexico border has been essentially custom-free since the North American Free Trade Agreement went into effect, with no tariffs paid by U.S. importers.

“Now all of a sudden, the brokers along the southern border have to figure out ways to collect that duty,” she said.

Magnus said it’s not even clear what products border officials would tax.

Commercial traffic at the border is already snarled, and tariffs put in place hurriedly might add to the problem, said Ray Perryman, a Waco, Texas, economist.

“What a lot of people don’t recognize is many goods go back and forth across the border five or six times. Assembly takes place in one area, then shipped back for further work and other parts are added,” he said.

The actual collection of new tariffs might not be a problem, said Gary Hufbauer, a Peterson Institute economist.

“We’ve had a lot of tariffs during the Trump administration, so I expect the wheels are well greased. In an electronic age, they can do it pretty quickly,” he said.