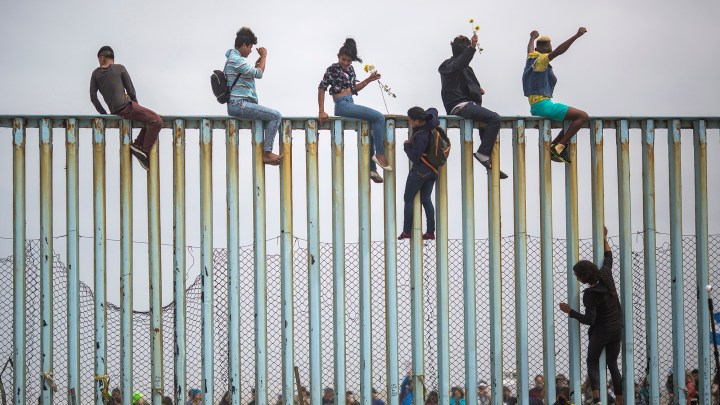 COPY
People climb a section of border fence to look toward supporters in the U.S. as members of a caravan of Central American asylum seekers arrive to a rally on April 29, 2018 in Tijuana, Baja California Norte, Mexico. David McNew/Getty Images
Trade showdown

People climb a section of border fence to look toward supporters in the U.S. as members of a caravan of Central American asylum seekers arrive to a rally on April 29, 2018 in Tijuana, Baja California Norte, Mexico. David McNew/Getty Images
Listen Now

There are no new tariffs on Mexican goods as of today. President Trump called them off Friday, satisfied — for now — that Mexico pledged to do more to keep Central Americans who are fleeing desperate economic and social conditions from from crossing into Mexico and then the U.S.

Migrants are leaving Guatemala, Honduras and El Salvador to escape violent gangs and cartels that control most of the Northern Triangle economy.

According to Gordon Hanson, who teaches economics at the University of California San Diego, enforcement measures like these only treat symptoms, not root causes.

“What we need is a much more systematic approach to deal with this intrinsic problem of domestic insecurity associated with the presence of major criminal organizations,” he said.

No amount of military or police enforcement action in Mexico can effectively counter the deep economic and social problems in Central America that are causing people to flee, according to Christopher Wilson at the Woodrow Wilson Center’s Mexico Institute. He says Mexico’s resources are already strapped dealing with overcrowded detention centers.

“This is hugely difficult for them to manage,” he said. “There are essentially migrants in the streets in these communities.”

“We’ve been told tariffs are still on the table, they may come back again, and that sends a very bad message to the investment community, to people looking to hire or expand,” Perryman said. “It says ‘things are really uncertain down here, you may not want to do anything.'”