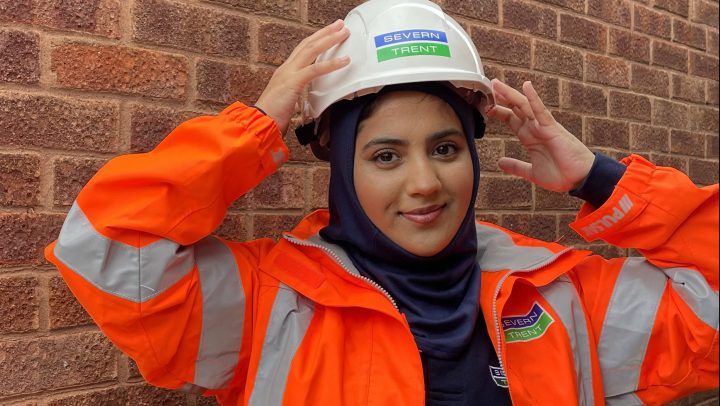 Aminah Shafiq is a senior water quality advisor for Severn Trent Water, based in the Midlands region of the United Kingdom. Shafiq that said when she joined the company, she felt welcomed, but she was aware of being the only Muslim on the team.

“I think that’s what made me think initially like, if I was to pursue a career in engineering, going out to site and doing that manual sort of operational work, how far can I get?” Shafiq said.

Recently, Shafiq has been working on a side project to design and roll out a headscarf for women who need to wear personal protective equipment for on-site jobs.

“The idea initially came around because when I was out on site, I was finding that I was adjusting my PPE,” she said. “Normally, we have like a high-vis jacket, a helmet, some safety boots, gloves and safety specs.”

Shafiq said she found herself frequently adjusting her helmet because the loose material from her headscarf prevented the helmet from fitting snugly.

“I took inspiration from like an athletic headscarf that had more of a snug fit and kind of took that idea forward to people higher up in the company,” Shafiq said. “Then, it was rolled out and put into the catalog, and we now have a PPE headscarf.”

The PPE-specific headscarf made waves industry-wide, and Shafiq said she’s hoping it encourages more inclusivity in the engineering industry for other Muslim women looking to take up operational positions.

“I hope it positively affects people’s thinking, especially Muslim women who may have wanted to pursue an operational role but probably felt like they couldn’t because the industry is not for them,” she said.

“Just because you follow a certain religion doesn’t mean that your safety should be compromised, so that’s the message that I want to send out.”