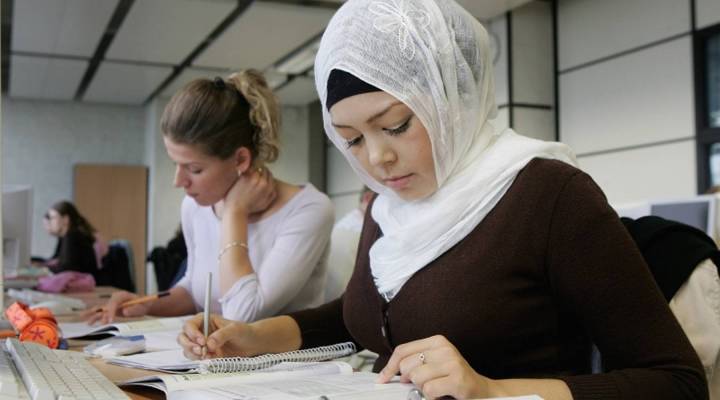 There’s a old saying that’s true for the politics of any given economy and economics writ large: demography is destiny. Who’s in your workforce matters a whole lot, and across the Muslim world, that’s increasingly women. Saadia Zahidi is the head of Education, Gender and Work at the World Economic Forum. She talked with Marketplace host Kai Ryssdal about her new book, “Fifty Million Rising: The New Generation of Working Women Revolutionizing the Muslim World.” The following is an edited transcript of their conversation.

Kai Ryssdal: I want to start where you start in this book. You’re a kid, you’re, like, 10 years old and you go out with your dad in Pakistan somewhere. He’s I guess a petroleum engineer, right? And you go out for a day with him?

Saadia Zahidi: A geophysicist, yeah, working in the oil and gas industry.

Ryssdal: And you get out there and you find this thing that I guess fundamentally leads to this book right?

Zahidi: Yeah, you know, I was not expecting this. And I met for the first time a woman engineer on this gas field and I just hadn’t seen somebody be in what was a very, very male-dominated profession. I’d seen women, you know, be doctors and teachers, because those were socially acceptable professions. You know, as I say in the book, once she was seen, she could not be unseen. And I think that’s what’s happening for millions of young women and girls a couple of decades later as they’re seeing these new women joining the workforce and across a range of different professions.

Ryssdal: The book is called “50 Million Rising.” I want you to tell me, broadly speaking, obviously, who those 50 million are.

Ryssdal: What role in this rise do governments play in women being able to attain a meaningful place in the workforce?

Zahidi: You know, what’s really interesting, one of things that I found fascinating, much of it is organic. It’s happening because these previous investments were made in education, but this shift that’s happened in the last 15 years is by and large organic and not because of a top-down government policy. It’s happened because technology has become a tool of work. There’s the gig economy, people are using technology to create new kinds of platforms, and that is providing a very different type of flexibility. It’s happening because of the globalization of ideas. So not just the globalization of goods and services, but ideas. And so for a lot of these young women, their role models are no longer just what their mothers have been doing or what is happening in their neighborhood or in their communities or schools, but actually they can look at what somebody on the other side of the world is doing. And then the third reason is economic necessity. It is just simply no longer possible for a middle-class family that has aspirations for its children in an urban area and much of the emerging markets of the Muslim world to live on a single income in any household.

Ryssdal: There is a supply thing going on here, right? There’s obviously a huge mass of women who want to, for all the reasons you’ve laid out, get into the workforce. Is there are commensurate demand from businesses and corporations and the economic system to have these women participate?

Zahidi: In many ways, businesses seem to be ahead of governments in terms of recognizing the change that’s happening. And that’s because of two reasons. One, they’ve started to recognize the power of this market. So the combined earnings of these 155 million women across these 30 countries, it’s $1 trillion. So it makes them approximately the 16th largest economy in the world if we were comparing them to economies. And so they’re starting to think of them differently as a market. The second big reason is, across most of the Muslim world and nearly every single country, there are more women coming out of university than men, and that’s been the case for about 10 years or so now. So for example, in Saudi Arabia, out of all of the women that could be going to university, 50 percent are. And that is higher than in China, in India, in Mexico, in Brazil. And so the base of the white-collar talent in particular is more female than it is male. And that’s another thing that companies are starting to recognize, and they’re starting to design their organizations to take this new influx of talent.

Ryssdal: Does the pace of change give you pause at all? Because, you know, a couple of decades in the grand scheme of things, it is really like the blink of an eye.

Zahidi: Yeah, compared to where these countries were about a decade and a half ago, the shift is massive. It’s a 50 percent increase compared to how many women were working before. At the same time, this is still only about 30 percent of the adult population in the 30 countries that I was looking at. A lot of the women that I was speaking to in these countries, they felt that they were probably a transition generation. They are doing something that their mothers and grandmothers would never have been able to do. And yet what they’re really banking on is what happens to the generation after them. So what they’re going to do in terms of investments and their daughters, and a whole different set of aspirations that their daughters will have, and the very different views that their sons will have about what women can do, that’s I think what’s going to be the game changer in the future. And so there’s every reason to believe that this trend will accelerate.