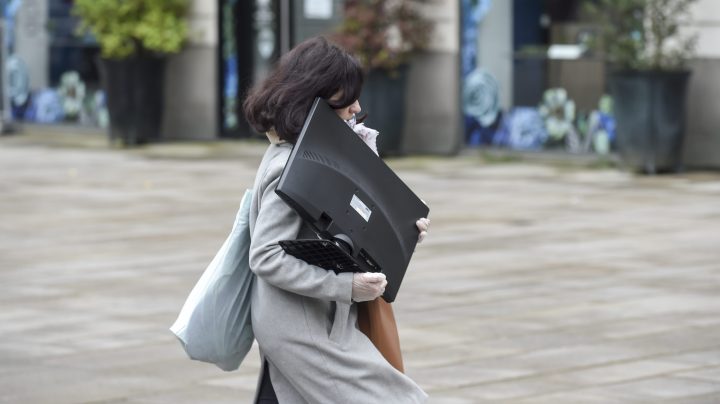 COPY
"That's the worry, that the women who take advantage of this new workplace flexibility will wind up in the same old mommy track," argues Emily Peck, who wrote about how working from home could hold women back professionally. Sebastien Salom-Gomis/AFP via Getty Images

"That's the worry, that the women who take advantage of this new workplace flexibility will wind up in the same old mommy track," argues Emily Peck, who wrote about how working from home could hold women back professionally. Sebastien Salom-Gomis/AFP via Getty Images
Listen Now

The future of white-collar work appears to be some sort of hybrid model, with corporate employees working a few days remotely and a few days in the office. However, as Emily Peck wrote in Politico, some academics and advocates are concerned new workplace flexibility could hold women back professionally, putting them on what’s long been called the “mommy track.”

Peck is a co-host of the podcast “Slate Money” and content director at Fundrise. She spoke with “Marketplace” host Kai Ryssdal about what hybrid workplaces could mean for women. The following is an edited transcript of their conversation.

Kai Ryssdal: The mommy track was a thing before the pandemic, right, like for decades. Refresh the memory, if you would. What basically was that?

Emily Peck: Oh, my gosh, the mommy track has been a thing, yes, for decades. Basically the mommy track is this alternate path that women found themselves kind of stuck on after they became parents. And law firms and other hard-hitting white-collar workplaces gave them flexibility, time off when they needed it, but then didn’t give them promotions, didn’t advance them. So it wasn’t exactly a great thing.

Ryssdal: And it is still not. And you worry, and the point of this piece actually, is that the way we work now and for the foreseeable future — which is hybrid Zoomy, whatever — is going to be even more challenging in a way.

Peck: Yeah, that’s the worry, that the women who take advantage of this new workplace flexibility will wind up in the same old mommy track as before, despite all the advancement we thought happened since the 1980s.

Ryssdal: Yeah, and you write the fear is that women are going to take advantage of the hybridness for a lot of reasons, main among them child care and caregiving. They’re gonna choose that more than men will, and thus the — this is kind of a strong word, right — but the stigma will still attach.

Peck: Yes, exactly. Women want to work more flexibly. Men want to also, don’t get me wrong, but women take on more caregiving responsibilities typically. And if you’re at home during the day, you can run out and do a bunch of stuff and still get all your work done. But also, the potential for being stigmatized at work is greater for women. And it kind of always has been, you know, that flexibility comes with that big downside, essentially,

Ryssdal: There’s been a lot about women in the workforce and the challenges that this pandemic has brought to them. Do women, even though they slightly more than men choose the remote and hybrid work option, do they understand that that comes with a penalty, or is it, like, insidious?

Peck: That’s a really good question. I think the word “choose” is doing a lot of work in the question. During the pandemic, so many women found they had little choice when it comes to caregiving responsibilities. So, yeah, you know, there’s a penalty, but you still have responsibilities that you have to take on. And it’s hard to know how to handle it as an individual, such a systemic problem.

Ryssdal: You can see the places where this would be an issue, right? You could see, like, Wall Street frowning on remote work. I mean, Jamie Dimon, the CEO of JPMorgan Chase has basically said you’ve got to be in the office to show me you’re hustling. Law firms, you could see that as well. Are there places that are doing it right — which is to say, you know, fairly and equitably?

Peck: Yeah, I mean, I have a few examples. In the piece that I mentioned, I talked to the folks that Etsy and the C-suite, they’re not going to come in five days a week. They want to avoid people coming in to curry favor with leadership, they want to set the example. So that’s sort of like one thing they’re doing.

Ryssdal: Yeah, the Etsy thing is interesting, right? Because FaceTime with the boss is a perennial “you got to have it or you’re not going to get promoted,” and for leadership to recognize that is a net positive.

Peck: Yeah, definitely. I mean, they call it, I think I name it in the piece, is “proximity bias.” So, any way you can be intentional about that issue is gonna be a benefit.

Ryssdal: So look, do you work from home? What’s your proximity bias, you know, quotient?

Ryssdal: But wait, that’s an interesting thing, right? Because even if, you know, lots of people are in an office remote, there are some people who might be hybrid and in the office space, and you have a meeting. And you have a meeting and you’re on Zoom, but the other four people in the meeting happened to be in the office that day, and you’re the one who gets hosed.

Peck: Yeah. Right, you get hosed. I mean, you feel left out. I spoke to a bunch of people about this. If four people are in the office and one person’s at home, the advice is for everyone to hop on Zoom. But I don’t know if that’s a perfect solution. Because you know, the Zoom ends and those four people are still in the office. And they’re going to talk to each other, and they should. So, it’s a problem.