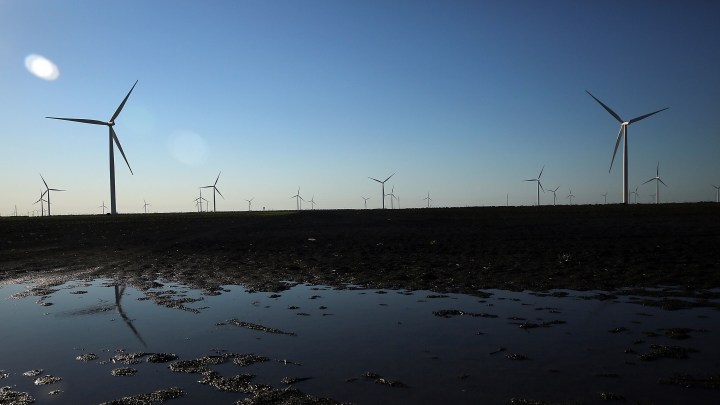 COPY
"If you look at where wind and solar need to be placed in this country, it's mainly in the Midwest, and your demand centers are on the coasts," said Gary Kruse, managing director of research at Arbo. Spencer Platt via Getty Images
A Warmer World

"If you look at where wind and solar need to be placed in this country, it's mainly in the Midwest, and your demand centers are on the coasts," said Gary Kruse, managing director of research at Arbo. Spencer Platt via Getty Images
Listen Now

After a series of energy-infrastructure failures around the globe, and with the threat of climate change looming, experts and legislators are pushing for changes in the U.S. electric grid. But the road to a clean grid is not as straightforward as it sounds.

Gary Kruse is managing director of research at Arbo, which provides legal counsel on large energy-infrastructure projects. He said there are three factors to consider in restructuring the grid: The new plan must be affordable, clean and reliable. Kruse understands the need for the transition with the effects of climate change already being felt, but he said we can’t have all three factors because clean energy hasn’t reached that point yet.

“Marketplace” host Kai Ryssdal spoke to Kruse about the current state of energy infrastructure in the United States and what the transition to clean energy should look like. The following is an edited transcript of their conversation.

Kai Ryssdal: All right, so let’s get to the future, then, of this grid, which you have said has to be affordable, it has to be clean and it has to be reliable. And it kind of sounds like one of those trick questions where you say, “Well, we need these three things. And you can have two.” You know what I mean?

Kruse: Yes, I would agree with that. Obtaining all three is a very difficult problem to solve, yes.

Ryssdal: Well, you’re the expert. How do we get there, because we kind of have to, right?

Kruse: I think what we need to do is to avoid the extremes. Right now in this country, I think we’re being pulled in two different directions. One extreme, that we sort of need to do nothing, and the markets will take care of it. And on the other extreme, you have environmental purists that say, “We have to go to wind and solar now and need to make that transition immediately.” Both of those create different risks. The market forces, I mean, as we saw in Winter Storm Uri, don’t really work to bring you cheap and affordable and reliable power. And, as we said, this build-out of wind and solar only creates its own problems of not only reliability but also affordability. So in our minds, the path forward is probably some mix of wind, solar and existing sources of generation like natural gas — along with probably hydrogen.

Ryssdal: Yeah, until we can wean ourselves from the fossils, basically, right? That’s what it has to be. So look, let’s say I gave you a trillion dollars. What would you do?

Kruse: Well, I think the biggest hurdle you have to overcome is this transmission build-out we talked about. If you look at where wind and solar need to be placed in this country, it’s mainly in the Midwest, and your demand centers are on the coasts. And it’s those states in between that are not going to get much of a benefit because the towers are just going through them to bring the source to the demand. We think focusing on that transmission and getting that built, in incentivizing those people in the middle states to accept that burden, will certainly facilitate the build-out that you talked about.

Ryssdal: I wonder if this is one of those — which come up every now and then in this country — where we’re gonna get to the right answer because we have to, but it’s gonna be way, way harder than it kind of objectively needs to be.

Kruse: I would agree with that. I mean, but I think it is, it may be one of our weaknesses, but it’s also one of our strengths in the sense that I do think the federal government has a role to facilitate, but I do think the states and the private sector are capable of solving the problem. And I think for many of them, they have the will at this point. It’s just a question of creating the way for them.