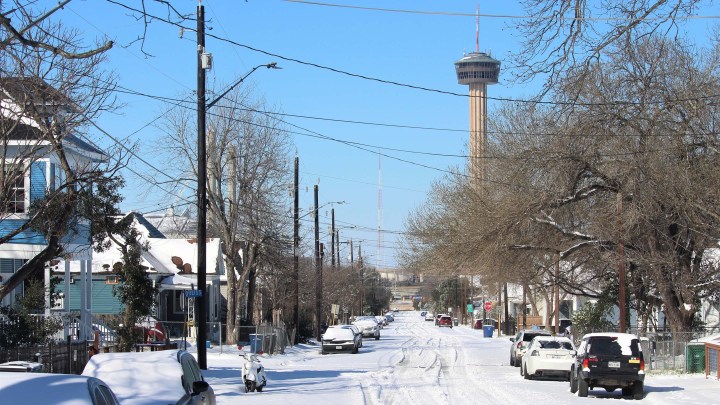 COPY
Several inches of snow blanketed most of Texas on Feb. 15. In the Denver Heights neighborhood of San Antonio, residents woke up to rolling blackouts that eventually turned into a multiday outage. Dominic Walsh

Several inches of snow blanketed most of Texas on Feb. 15. In the Denver Heights neighborhood of San Antonio, residents woke up to rolling blackouts that eventually turned into a multiday outage. Dominic Walsh
Listen Now

Texans may soon have fewer electricity providers to choose from if some of the state’s smaller companies fail in the wake of February’s powerful winter storm.

Right now, most Texans choose from a handful of retail electric providers that offer competing rate plans. The idea is that more competition helps lower costs, but the market is highly consolidated.

“It’s estimated about 70% of the retail market’s dominated by just two companies,” said Tim Morstad, an electricity utilities analyst with AARP of Texas.

He and other analysts said they are worried about the future of the market for consumers, especially after the state paved the way for big companies to scoop up consumers from failing businesses.

“Over 15 years, there’s been a good number of retail electric providers operating in this deregulated market,” he said. “However, in the last few years, [the market] has become consolidated and very much dominated by two companies buying up many others. And we’ve got a concern that that trend is going to continue and result in less competition and higher prices for consumers.”

The two companies he mentioned are Vistra and NRG.

Melissa Smith lives in the Dallas area, and she’s a customer of TXU Energy, a Vistra subsidiary. After her home flooded, Smith asked her husband to check their electricity bill.

That’s more than double what her family pays in a normal month. TXU said part of that figure is just an estimate for how much the Smith’s would owe for the full month. But the bill also reflected increased electricity use during the extreme cold.

The unusually high demand from Smith and millions of other Texas consumers, coupled with a lack of supply as generators were knocked offline, led to a huge surge in the cost of power for electricity providers, like TXU Energy. Many smaller companies are expected to go out of business because of those costs — and their consumers are likely to get scooped up by the larger companies.

“It is a very serious problem,” said Peter Cramton, an economics professor at University of Cologne.

Cramton spent more than five years on the board of directors for the Electric Reliability Council of Texas, more commonly known as ERCOT — the operator of the Texas grid. He resigned in February amid political turmoil after the outages.

He said it will be a problem if the electricity market in Texas becomes even more consolidated.

“It is what led — what leads, in banking, to the problem of ‘too big to fail,’ where the one or two or three banks that remain standing are huge monsters that can’t fail,” he said. “And what that does is it destroys the incentives for good behavior.”

Vistra and NRG responded to questions about consolidation with statements on behalf of their subsidiaries. Both said that customers of companies that go bankrupt are free to switch to another provider at any time.