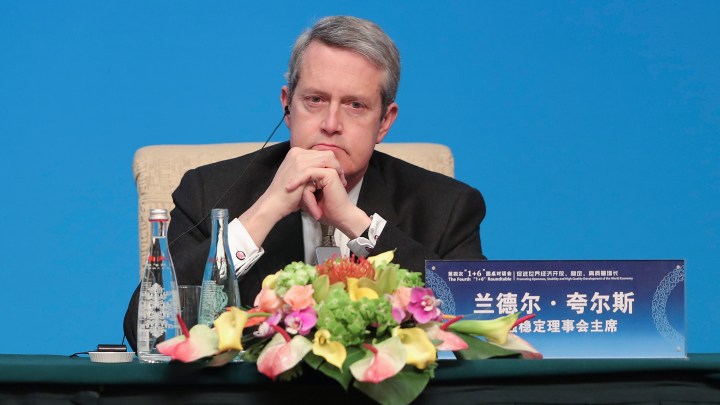 COPY
Randal Quarles, a member of the Federal Reserve board of governors, was vice chair for supervision at the central bank until this week. The Fed said that position would go unfilled. Lintao Zhang via Getty Images

Randal Quarles, a member of the Federal Reserve board of governors, was vice chair for supervision at the central bank until this week. The Fed said that position would go unfilled. Lintao Zhang via Getty Images
Listen Now

The Federal Reserve announced this week that Randal Quarles’ term as vice chair for supervision — basically the Fed’s top banking cop — would expire with no one replacing him. He’ll still be a member of the Fed’s board of governors, though.

So what does that mean? What does a Fed governor do?

Usually, there are seven Fed governors, including the chair and two vice chairs. They’re nominated by the president and confirmed by the Senate.

But the board of governors is supposed to be independent — apolitical.

How much power do the Fed governors have over the economy? Well, they do vote on interest rates. But “the Fed chair is the CEO. The agenda, as I say, is set by the Fed chair,” Levin said.

Levin said that when he was at the Fed, it was common knowledge that in the ‘90s, on Friday afternoons before big meetings to set interest rates, Chair Alan Greenspan would walk down the hall, stopping by each governor’s office to tell them, “OK, this is what we’re going to do.”

Greenspan’s successors, Ben Bernanke and Janet Yellen, were very different, per Scott Brown, chief economist of Raymond James, which is a Marketplace underwriter.

“Both Bernanke and Yellen had this view that they don’t know everything and are willing to listen to other points of view, and the Fed tries to come to its monetary policy decisions by consensus,” Brown said.

Georgetown finance professor Reena Aggarwal said the vice chair for supervision oversees banks and is responsible for “what happens during a crisis time and what restrictions are put on dividend payments or repurchases of stock.”

This is the position that’s empty now. Whoever President Joe Biden chooses to fill it, Aggarwal said, will focus on issues like economic inequality.