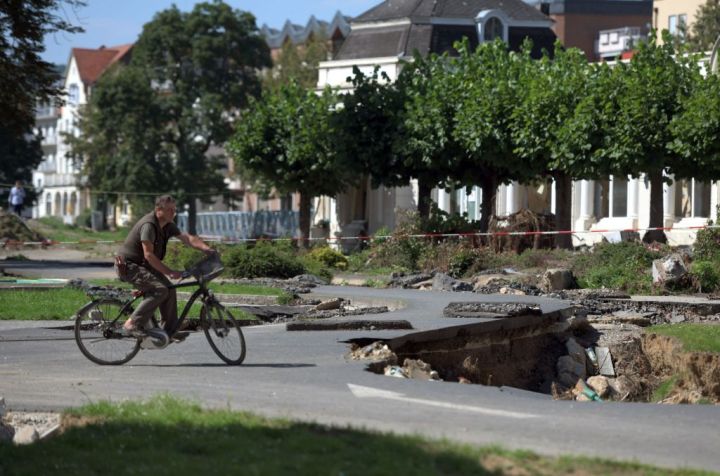 COPY
A man rides his bicycle on streets destroyed by the flood in Bad Neuenahr, western Germany on August 25, 2021, weeks after heavy rain and floods caused major damage in the Ahr region. INA FASSBENDER/AFP via Getty Images

A man rides his bicycle on streets destroyed by the flood in Bad Neuenahr, western Germany on August 25, 2021, weeks after heavy rain and floods caused major damage in the Ahr region. INA FASSBENDER/AFP via Getty Images
Listen Now

Results from Germany’s national election are in. The center-left Social Democrats narrowly beat outgoing Chancellor Angela Merkel ’s center-right Union bloc in the race to determine who succeeds her at the helm of Europe’s biggest economy.

A number of issues dominated the campaign trail, but climate change has remained at the top of the list this summer after devastating floods rocked the western part of the country.

We’ve been traveling through some of the worst affected areas, finding out whether more resilient infrastructure could help limit the damage from catastrophic weather events like this one.

Drilling and construction are the sounds of resilience echoing through the town of Bad Neuenahr-Ahrweiler in western Germany.

It hugs the banks of the Ahr river, which this summer burst during catastrophic floods. Many described the devastation as the worst in a hundred years.

“Everything’s got to be replaced from top to bottom: Heating, electricity, doors, windows, my stock. I’ve only got two tables and a mannequin left. That’s it,” said Martina Kleinow, who owns a women’s clothing and accessories shop called Clara.

All that’s left of it now though, is the facade.

The light hardwood floors have been ripped up. The molding and white-painted walls are gone. Even the windows and her large shop sign above the door have been demolished. It was all reduced to rubble, now shoved in five-foot bags outside on the sidewalk.

“When I stood by the church the next morning at 8 a.m., I could see everything, it was unbelievable, what came through here, the mass of it, the force of it,” she said.

In this, the hardest hit flood region in Germany, officials said at least 130 people died. Hundreds more were injured and some missing. Many blame, in part, lack of advance warning, and German prosecutors have launched an investigation into whether residents were properly made aware of the risks and dangers of the storm.

Now, focus is turning to ways to prevent storms like this from causing so much devastation.

The way the town rebuilds could help. And a project about 125 miles to the southeast in the city of Offenbach could provide a blueprint.

“We have large areas where the water can kind of rise and flood large areas. And that’s very important that the water can expand,” said Ulrich Lemke, the project manager for a regeneration project at Offenbach port that’s turned the former industrial site into one focused on living, working, and educational spaces. He explained that the site has been designed to allow the river to expand while keeping residential and work areas higher off the ground.

“We kind of build flooding areas. And then it’s also important to have a lot of green spaces and, not to put the water directly back to the river,” he said.

Gerhard Hauber is a landscape architect who worked on the project, he’s also a partner at the global engineering and architecture consultancy, Ramboll.

“We need a massive change, honestly. That’s important,” he said.

His company works on projects across the globe, with a focus on finding ways for infrastructure to work with nature and cope with the increasing threats of climate change.

“You just need to shift the focus away from just building infrastructure that’s easy to build. If we integrate water management, you just have to introduce it in the very beginning,” he said.

For shop owner, Martina Kleinow, whatever shape the rebuilding efforts take, she’s determined to come back stronger than ever.

“We hope of course – everyone in the region hopes – that if this kind of catastrophe is going to happen again, that we really have time to protect our business,” she said.

Despite the toll it’s taken on herself, her town, and her business, Kleinow has vowed to stay in the place she loves, and is eyeing a grand reopening late next year.