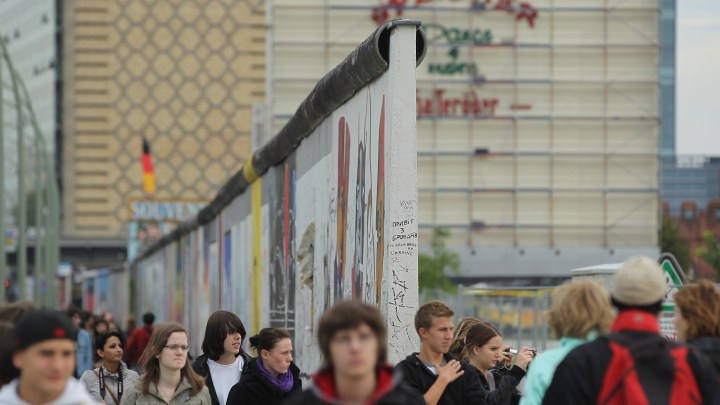 COPY
People walk past a section of the former Berlin Wall called the East Side Gallery in 2010, marking the 20th anniversary of reunification in Berlin. Sean Gallup/Getty Images
Fall of the Berlin Wall

People walk past a section of the former Berlin Wall called the East Side Gallery in 2010, marking the 20th anniversary of reunification in Berlin. Sean Gallup/Getty Images
Listen Now

In the three decades since communism collapsed and Germany was re-unified, the federal government has poured more than $2 trillion into the impoverished eastern part of the country. It also allowed easterners to swap their virtually worthless currency for the deutsche mark, which at the time was one of the strongest currencies in the world.

So what did this massive injection of cash achieve?

A good place to look for some of the answers is a museum in the Oberschoeneweide industrial district in southeast Berlin. The museum, in a disused factory, charts the rise and fall of East Germany’s high-tech electronic engineering industry.

The exhibits include a “Leningrad” television made in 1951, the first mass-produced TV for the Soviet market. There’s also a machine built to jam propaganda broadcasts beamed into East Germany by RIAS (Radio in the American Sector) Berlin.

Other exhibits reveal how, after the wall came down, the manufacturing businesses on this site went into steep decline. The workforce, once 25,000, dwindled to less than 2,000.

The story was similar throughout Germany’s Eastern states. Half of all workers there lost their jobs after reunification as their companies shrank or collapsed. Many factories were heavily overstaffed, and the products they produced could not compete with Western rivals.

The killer blow, said Rolf Langhammer of the Kiel Institute for the World Economy, was the currency conversion that gave Eastern Germans one deutsch mark for one nearly worthless Ostmark.

“That conversion rate priced labor out of the market,” he said. “East German companies suddenly had to pay the same nominal wages in a currency worth much, much more than the old Ostmark. At the time, economists were unhappy about the plan. They said the shock would be too hard.”

In spite of such warnings, the German government pressed ahead with the conversion rate because it feared that most Eastern Germans would decamp to the Western states if they did not have the same money as Westerners.

Cushioning the shock of that conversion has cost a fortune. More than half of the $2 trillion pumped into the East has been spent on welfare, unemployment pay and pensions.

Billions have also been spent on railways, roads and other infrastructure.

Billions more have been spent supporting businesses. Mats-Milan Mueller of Coman Software said a $1.5 million government grant persuaded his small company to set up in Stendal in rural Eastern Germany.

“If there hadn’t been this investment, tech companies like ours wouldn’t even think about setting up in a region like this,” Mueller told “Marketplace.” But now that the company is settled in a low-cost district in the East, he expects it to take off “like a rocket.”

The German government is determined to use the occasion of the 30th anniversary of the fall of the wall to trumpet the achievements of reunification. It admits the Eastern states still lag behind the West, with lower wages and higher unemployment, and that some of the $2 trillion of public money may have been wasted.

But Christian Hirte, the government commissioner for the New Federal States, said Germany has pulled off a remarkable feat: absorbing and modernizing a huge, inefficient communist economy.

“It’s been an amazing success story,” Hirte said. “German reunification … was a bargain.”

But he concedes that 2 million people have left the East and not returned, a brain drain that has sapped the vitality of the region.