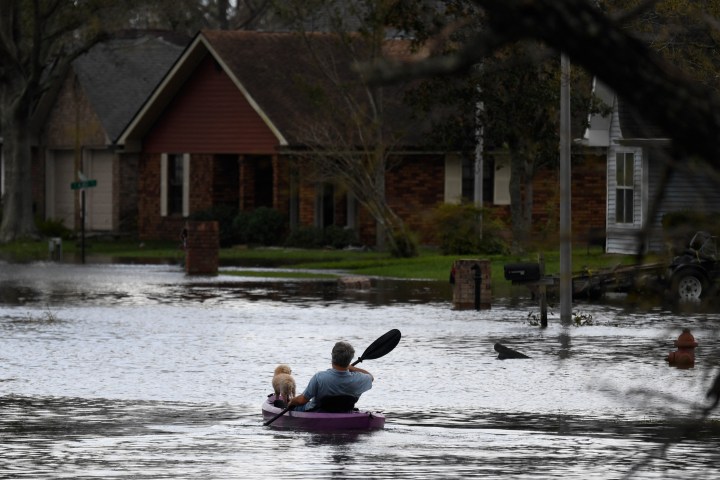 COPY
A person kayaks through flood waters in LaPlace, Louisiana, on Aug. 30 in the aftermath of Hurricane Ida. New Orleans-based journalist Ko Bragg says the rest of the country has “a lot to learn” from southeast Louisiana. Photo by Patrick T. Fallon/AFP via Getty Images

A person kayaks through flood waters in LaPlace, Louisiana, on Aug. 30 in the aftermath of Hurricane Ida. New Orleans-based journalist Ko Bragg says the rest of the country has “a lot to learn” from southeast Louisiana. Photo by Patrick T. Fallon/AFP via Getty Images
Listen Now

The New Orleans-based energy company Entergy released a statement on Friday saying it had restored power to about 80% of the 948,000 customers who lost power due to Hurricane Ida, but that 166,000 Louisiana homes remain dark.

Ko Bragg, a reporter and editor based in New Orleans, talked about becoming a homeowner earlier this year as part of our series “Adventures in Housing.” A week and a half after evacuating for Hurricane Ida, Bragg spoke with “Marketplace” host Kai Ryssdal about the road to recovery in her neighborhood. The following is an edited transcript of their conversation.

Kai Ryssdal: First of all, I guess, how were you? And how is that house that you told us so much about?

Ko Bragg: Sure. So, I’m doing OK. I’m happy to know that the power came back on earlier this week. It had been out for just about a week after Ida. So I had an opportunity to go back and see my house a few days after the storm. I wanted to go back and get some friends who didn’t have cars out of the city because it was just way too hot. There’s a tree on my roof. Like, there’s a tree that’s —

Ryssdal: On your roof or through your roof?

Bragg: It’s on the roof. I can’t quite see, you know, until we get that tree off, but like, it could have been so much worse and is [worse] for so many people, especially outside of New Orleans.

Ryssdal: This is a house, we should remind people, that you bought sight unseen, right? You clicked through some pictures on the internet, but I imagine really quickly, this house became kind of a part of you.

Bragg: Yeah, I mean, especially a house purchased during the pandemic. I work form home, and it’s hard — it was hard to leave, honestly. It’s hard to evacuate, because you want to be there to catch leaks or to make sure your house is OK. I know that is a reason why so many people stay.

Ryssdal: What’s it like for you and your friends and your family and people who you evacuated with or met when you left? What’s it like for all y’all to see the national attention shift to all the flooding in New York, and that sort of East Coast focus that a lot of the coverage has had since almost the day after it hit New Orleans.

Bragg: Sure. I think that the culture of being in southeast Louisiana, a place where the coast has been eroding for years, in part due to the big fossil fuel industry — you know, thousands of miles of the Louisiana coast that’s supposed to protect us from storm damage and all of that stuff is gone — and so there’s a culture of preparedness, and also of knowing that people are not coming to save us. There’s a deep community-care infrastructure that exists in this region, that frankly, the rest of the country has a lot to learn from.

Ryssdal: Would you like to even hazard a guess as to how long it’s going to be before your neighborhood is back to normal?

Bragg: Yeah, I think that part is going to be hard. When I went back to check on my house, I was just giving out water to people who have stayed, but also, it’s extremely expensive to evacuate. I sent some money to a new mom who had left with her newborn, and she was like, “I have to pay for hotels on my way back from Georgia, but I just don’t have that kind of cash on hand.” And so thinking about that, it’s going to take a while for people to come back. And also, once you get back, that’s when you really have the wherewithal to deal with, “Am I going to apply for FEMA aid? What does that even look like? How long is it going to take?” Because if you look just over to the western corner of our state, at Lake Charles, which got hit with Hurricane Laura last year, there’s people still waiting in houses covered with blue tarp for that government aid to come in.

Bragg: I absolutely would buy the house again. And I have a friend who’s born and raised in New Orleans (she’s also a new homeowner) and the way she put it is, even if New Orleans is one day completely underwater, she’ll be proud to own the little piece of land in the ocean. I think that’s how a lot of people feel. It’s a very proud area. It’s that care infrastructure that I can’t stress enough that makes you want to stay, and that’s also why we wanted to rush back to help people that are really in need and really love their neighbors.