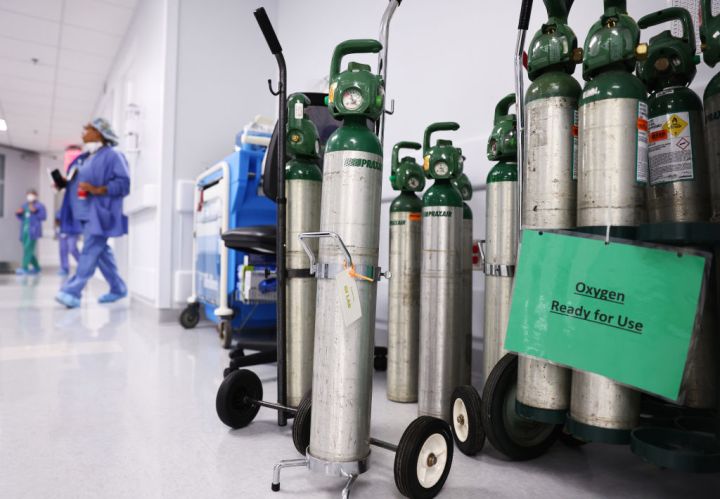 COPY
Oxygen tanks are ready for use on a floor dedicated to COVID-19 patients at Lake Charles Memorial Hospital on Aug. 10, 2021 in Lake Charles, Louisiana. Mario Tama/Getty Images
COVID-19

Oxygen tanks are ready for use on a floor dedicated to COVID-19 patients at Lake Charles Memorial Hospital on Aug. 10, 2021 in Lake Charles, Louisiana. Mario Tama/Getty Images
Listen Now

Hospitals in many parts of the United States are running low on oxygen, which they use to keep people alive when they’re having trouble breathing. Hurricane Ida could make that shortage worse.

Right now, because of COVID, hospitals are using way more oxygen than they normally would. And some are close to running out.

“We had a survey last week where a number of hospitals had less than 48 hours worth of oxygen on site,” said Mary Mayhew, head of the Florida Hospital Association.

Part of the problem is transportation. There’s a fire risk with liquid oxygen and you need a special license to transport it.

“In California, they were having issues of having enough commercial truck drivers who are certified to drive the trucks,” said Dr. Eric Toner with the Johns Hopkins Center for Health Security. The crisis could get worse in the South this week because of Hurricane Ida.

“When Katrina hit, it basically devastated the transportation networks,” he said.

If roads are damaged or flooded, it’ll be harder for truck drivers to get oxygen to the hospitals and to patients injured in the storm.