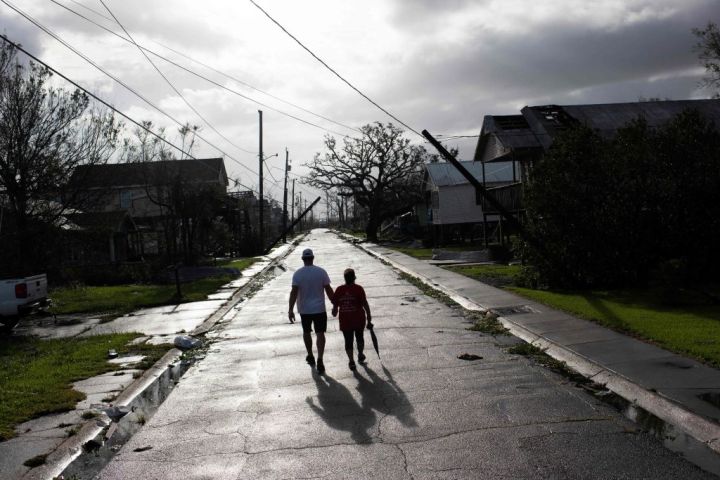 COPY
“Next to water, I would say the air conditioning is probably the biggest issue because it’s just brutally hot," says Douglas Harris, a professor of economics at Tulane University, of conditions in New Orleans. Mark Felix/AFP via Getty Images

“Next to water, I would say the air conditioning is probably the biggest issue because it’s just brutally hot," says Douglas Harris, a professor of economics at Tulane University, of conditions in New Orleans. Mark Felix/AFP via Getty Images
Listen Now

More than a million people in Louisiana were still without power Tuesday, two days after Hurricane Ida made landfall.

That includes the entire city of New Orleans. The area’s main power company, Entergy, is saying it might take weeks to restore electricity in some places.

“We knew going in that we were going to have some uncomfortable nights … but what we didn’t expect is to have a major transmission line go down,” said Norma Jean Mattei, who with her husband decided to stay put in their New Orleans house for the hurricane.

Mattei is a professor of civil and environmental engineering at the University of New Orleans, and she said having transmission lines go down, the ones that carry power from a long distance, not just local power lines, “that is a significant difference.”

Because now, instead of a few uncomfortable days, people in and around New Orleans are facing the prospect of weeks without lights, internet and refrigeration.

“It affects everything,” said Douglas Harris, a professor of economics at Tulane University.

“Next to water, I would say the air conditioning is probably the biggest issue because it’s just brutally hot. Now it’s back in the 90s and with humid temperatures, and it’s just not really livable,” Harris said.

People with money can cope Harris said, by evacuating, going to a hotel or buying a generator.

“People with lower incomes don’t have the money to do that. And that’s why a lot of people don’t evacuate,” Harris said.

The priority for local and federal government officials has to be getting at least some power back up and running, said Brock Long, former Federal Emergency Management Agency administrator.

“Hospitals can only sustain for a limited number of days. And as the power remains off, you’re going to have to start evacuating patients inside hospitals to other locations,” Long explained.

That’s especially tough right now. Many hospitals in Louisiana and nearby states are full with COVID-19 patients.

“The longer the power’s off, the more of a threat to a person’s life and safety there is, no doubt about it,” Long said. And the higher the cost of recovery will be, he said, for affected communities.