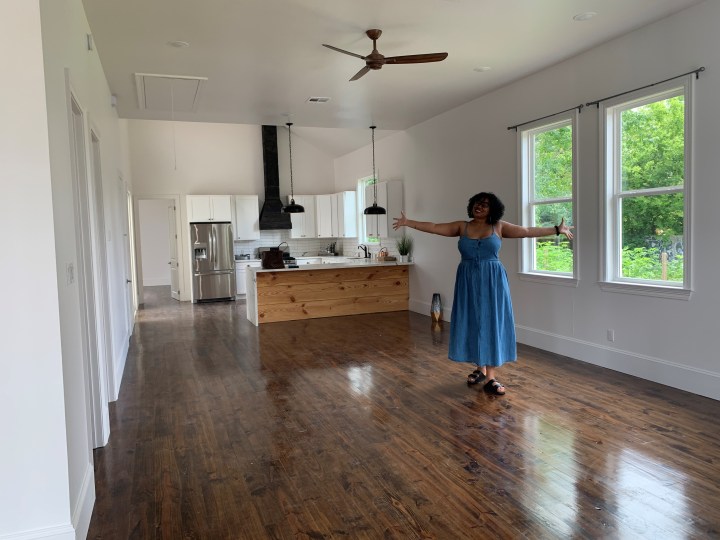 COPY
Ko Bragg, one of the 2.38 million Americans who purchased a home for the first time in 2020, inside her New Orleans house. Courtesy Ko Bragg
Adventures in Housing

Ko Bragg, one of the 2.38 million Americans who purchased a home for the first time in 2020, inside her New Orleans house. Courtesy Ko Bragg
Listen Now

The pandemic has been a catalyst for many people to become homeowners. According to a report by Genworth Mortgage Insurance, 2.38 million Americans bought a home for the first time in 2020, a 14% increase from the year before.

One of them was Ko Bragg, a journalist based in New Orleans.

“I honestly wasn’t thinking about buying a home before the pandemic,” she said. “But I figured that it would feel better to be paying into a mortgage than to be paying to line the pockets of my landlord.”

But the first steps after moving in were scary. Bragg said she broke down in tears.

“I think it was just everything collapsing on me at once of like, I have a mortgage and furnishing, and like doing all the things you need to do after you put that down payment on.”

Ultimately, homeownership has been a source of empowerment and personal growth for Bragg.

“I think a lot of people count homeownership as something that you do once you are in a marriage where you are planning to have children,” she said. “After this year of actually doing it on my own, I’m so glad that I’ve gotten this experience.”

Homeownership is a key path to building wealth in the United States, but remains out of reach for many. The gap in homeownership rates between Black and white Americans is higher today than it was in the 1960s when race-based discrimination was legal.

Bragg wrote recently about her experience buying a home as a single Black woman for The Lily.

“I’m really happy about the lessons that I’ve learned as a homeowner,” she said. “But it also makes me frustrated to know how unattainable this is for so many people who look like me.”

Click the audio player above to hear Bragg’s story.