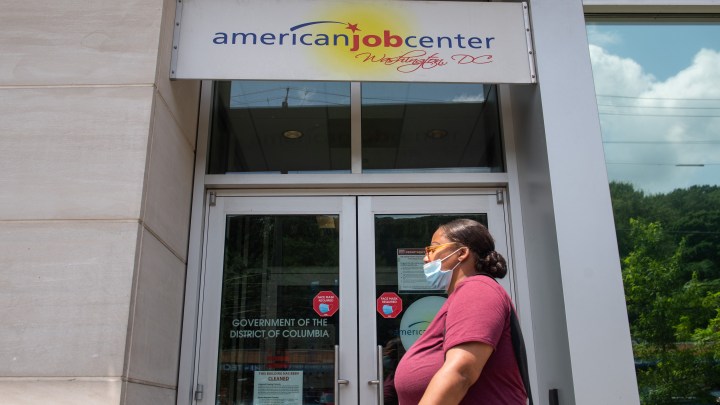 COPY
A woman walks past the an employment services center in Washington, D.C., in July 2020. In the most recent unemployment report, Black workers were the only racial or ethnic group to see unemployment rise. Saul Loeb/AFP via Getty Images
COVID & Unemployment

A woman walks past the an employment services center in Washington, D.C., in July 2020. In the most recent unemployment report, Black workers were the only racial or ethnic group to see unemployment rise. Saul Loeb/AFP via Getty Images
Listen Now

The unemployment report released on Friday showed weaker than expected job growth in August as the COVID-19 delta variant surged. Though the overall trend was positive — unemployment fell from 5.4 to 5.2% — that was not the case for Black workers.

They were the only racial or ethnic group for whom unemployment rose — to nearly 9%. The trend is going in the wrong direction just as federal unemployment benefits, which have extended and expanded relief for millions of Americans, expired on Monday.

The unemployment report did contain one piece of sort of good news for Black workers, said Chandra Childers, a director at the Institute for Women’s Policy Research: the number of Black workers in the labor force went up in August after falling the month before.

Industries like leisure and hospitality, state and local government and child care have been slower to bounce back — and they are big employers of Black women.

“Not only do Black women work in childcare, but they also are more likely than other groups of women to be the sole provider in their households, which means child care becomes ever more important,” Childers said.

But differences between industries don’t fully explain the gap in Black and white unemployment, said William Spriggs, an economist at Howard University and the AFL-CIO. He said it’s clear there’s discrimination in the labor market.

Black workers remain unemployed the longest, Spriggs said, supporting the adage they are often the first fired, last hired in our economy.

That makes the cut off of federal unemployment programs all the more concerning, said Andrew Stettner at the Century Foundation.

“The thing we’re trying to prevent is, are people pushed into economic situations that can have a long-term family and social effect — do they lose their home, they lose their car?” he said.

Stettner said Black workers have been more likely to rely on federal programs, which offered relief to the long-term unemployed, those without traditional full-time jobs or those who had to leave work due to caretaking or illness. They’re more likely to live in Southern states, too, where it can be harder to qualify for unemployment and benefits are lower.

COVID & UnemploymentRace and Economy
Tags in this Story
Share this Story