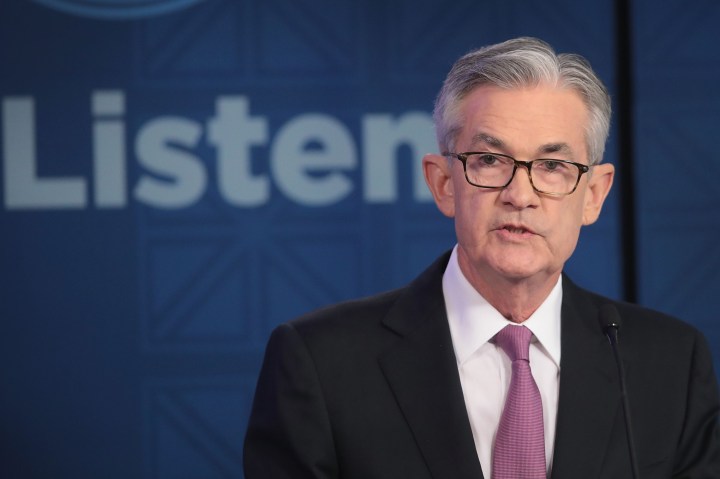 COPY
Fed Chair Jerome Powell. The central bank has been keeping interest rates low, but Wendy Edelberg says in the near future it should let the economy "grow on its own two feet." Scott Olson/Getty Images

Fed Chair Jerome Powell. The central bank has been keeping interest rates low, but Wendy Edelberg says in the near future it should let the economy "grow on its own two feet." Scott Olson/Getty Images
Listen Now

“Marketplace” host Kai Ryssdal spoke with Wendy Edelberg, director of the Hamilton Project and a senior fellow in economic studies at Brookings, about the post, which she co-authored. The following is an edited transcript of their conversation.

Kai Ryssdal: So I have to tell you, I read the headline on this blog post, which is, and this is a quote, “A Hot Labor Market Won’t Eliminate Racial and Ethnic Unemployment Gaps.” And I thought to myself, “It won’t?” So help me out here.

Wendy Edelberg: So indeed, it won’t. These are long-standing gaps, and they are largely there for structural reason and will require structural change to fully close.

Ryssdal: OK, so let’s do a little background here. No. 1, “hot labor market.” What exactly is that, for the layperson in the audience?

Edelberg: So the way most people would experience a hot labor market is seeing a really low unemployment rate. And employers trying to vie for people to come and work for them. And they’d see wage pressure. It’s basically when you know that the workers have the advantage, and not the firms.

Ryssdal: OK. And the hot labor market has historically helped Black and Hispanic workers, right? I mean, and that’s part of the reason that [Federal Reserve Chair Jerome] Powell, he says this all the time. And he said, even before the pandemic, “We’ve got to keep the labor market hot because that helps people in the lower end of the income spectrum.”

Edelberg: It absolutely does help. We’ve seen this. So when 2018 and 2019, we had what I would call a pretty hot labor market. And indeed, the gaps in the unemployment rates between Black workers and white workers were reaching historic lows. Way too high still, but quite low by historical standards. And then the pandemic hit, and those gaps reopened. All right, so now fast-forward 18 months or so, and the gaps have started to come down. But we can’t rely on the cyclical pressure to do all the work for us. So yes, great benefits. Right after the pandemic, the difference between the unemployment rate for Black men and for white men was, like, 6 percentage points. It is —

Ryssdal: Yeah, sorry to jump in. And now it’s like 3, 3½ percentage points, right? So it has come down during the course of the pandemic. But look, Jay Powell, staring inflation in the face, is being pressured to raise interest rates. He’s holding the line. Congress has done what it’s going to do in this pandemic. Now, what do we do?

Edelberg: Oh, geez. So that’s, that’s a really big question. I think it’s appropriate for monetary policy to remain really accommodative right now, particularly given what we’re seeing with the delta variant. But in not too long, in a couple of quarters, we will start to see our economy be unsustainably strong. So it’s gonna be time in the next few quarters to start letting the economy, you know, grow on its own two feet.

Ryssdal: Right. That’s fair. Just as a refresher here, monetary policy is interest rates and fiscal policy is taxing and spending by the government. But look, these structural challenges that you said at the beginning. What are they, and how do we fix them?

Edelberg: So there’s no shortage of ideas. One of the things that we need to do is make it as easy as possible for people to work. That includes paid leave. We need to make access to child care easy and affordable. We need to make sure that we give people the access to education that they can benefit from to be successful in the labor market. Policymakers know what to do. They just need to do the hard work to do it.

Ryssdal: Yeah. Just to be clear here, none of those things you just mentioned are in the Federal Reserve’s dual mandate of price stability and full employment, right? So we’re talking Congress here.