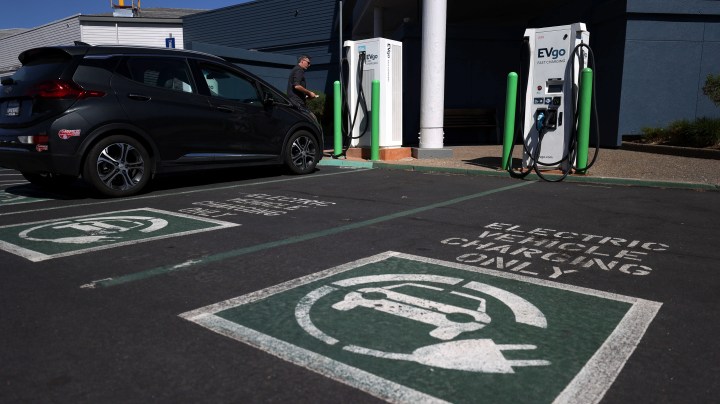 COPY
President Joe Biden is calling for 50% of new cars sold by 2030 to be electric, but the U.S. would need many more public and fast-charge stations. Justin Sullivan via Getty Images

President Joe Biden is calling for 50% of new cars sold by 2030 to be electric, but the U.S. would need many more public and fast-charge stations. Justin Sullivan via Getty Images
Listen Now

President Joe Biden signed an executive order Thursday calling for half of all new cars sold by 2030 to be electric.

That’s nine years from now. How realistic is that target? And what kind of infrastructure does the United States need to invest in to make it work?

Fifty percent sounds like a lot, given that only about 2% to 3% of cars sold in the U.S. today are electric vehicles, or EVs.

“It’s certainly an ambitious goal, but also I believe, can be achieved,” said Jessika Trancik, who researches energy systems and transportation at the Massachusetts Institute of Technology. “And part of the reason I think that is that we’re also seeing announcements by major companies, automakers that are setting comparable goals.”

So automakers are on board. What about consumers?

Christopher Harto, who follows sustainability policy at Consumer Reports, thinks interest will grow because “battery prices are expected to come down rapidly over the course of the decade, making EVs cheaper than gas-powered vehicles some time, you know, within the next five to eight years,” he said.

And when you drive an EV, even a hybrid, you also save money on gas. There’s still a lot that would need to happen to make that 50% goal work, though. We need more chargers, for example — especially the fast ones.

“These are the chargers that can recharge an EV in, you know, as fast as 20 minutes,” Harto said. Those would be placed along major highways “to allow people who own EVS to feel confident that they can go on longer trips without running out of charge,” he said.

Harto added that the U.S. also needs more chargers in cities, for people who don’t have a driveway or garage but still need to charge their cars overnight.

This executive order aside, there’s $7.5 billion in funding for electric vehicle charging infrastructure in the bipartisan plan.