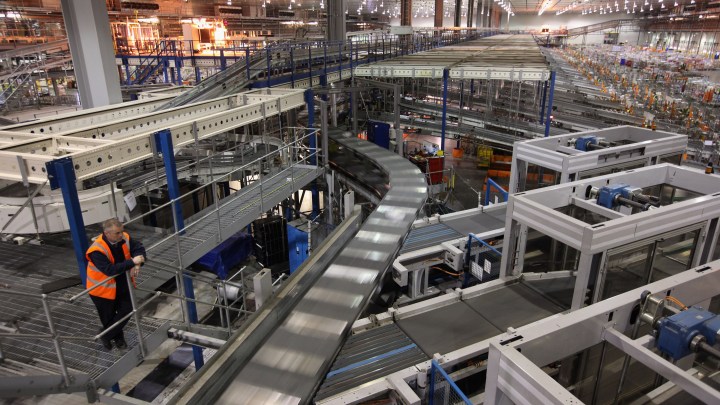 COPY
American workers replaced by automation may not have the same job prospects that displaced workers had in the past. Dan Kitwood via Getty Images

American workers replaced by automation may not have the same job prospects that displaced workers had in the past. Dan Kitwood via Getty Images
Listen Now

Over the last four decades, workers without a college education have found it hard to get ahead. High school dropouts and grads are making less money than they did in 1980, adjusted for inflation.

Economists and policymakers have long debated why. Is it outsourcing of manufacturing jobs? Automation replacing people? Weaker unions?

A new working paper from top economists argues the main reason is machines. It concludes that wages in America are increasingly unequal, and the biggest factors are related to automation.

Machines are replacing workers who perform routine tasks. Think elevator operator and toll collector. That means “there are fewer of these jobs,” according to the paper’s lead author, MIT economist Daron Acemoglu.

“You have to compete for these jobs or go to something else where you don’t have the right skills. And you’re going to experience a decline in your wage as you make that transition,” he said.

Acemoglu found that the people attempting the transition tend to be men with less schooling.

Those routine jobs also get squeezed when companies send work abroad. But Acemoglu said that’s a smaller factor. “Automation has happened more pervasively across the economy. So offshoring has focused on a fewer number of sectors.”

This is a working paper, so it will get peer reviewed.

One peer, economist Brad Hershbein at the Upjohn Institute for Employment Research, argues there’s another, related reason for low wages at the bottom: declining unions.

“If there’s weaker bargaining power on the part of employees, it’s a lot easier to implement technology that’s going to replace a lot of their tasks than if a union, for example, fights that,” Hershbein said.

Where most economists do agree is that education matters, specifically post-high school education.

“That doesn’t need to be a four-year college degree, but it could include additional certificates, skilled-trades training or reforming high school itself,” Hershbein said.

In the past, workers replaced by machines often found new jobs that were more productive and lucrative. But Acemoglu said that will not just happen by itself. It only comes “if we invest in new technologies that create new tasks and new opportunities for workers.” And he worries those breakthroughs are lagging.