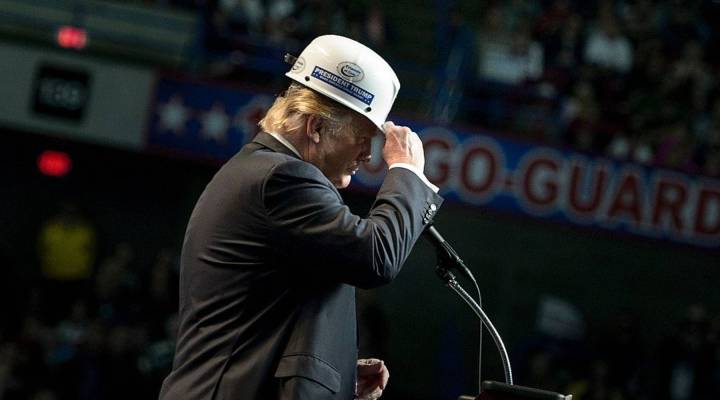 President-elect Donald Trump puts on a miner's hat while speaking during a rally on May 5, 2016 in Charleston, West Virginia.    BRENDAN SMIALOWSKI/AFP/Getty Images
Robot-Proof Jobs

President-elect Donald Trump puts on a miner's hat while speaking during a rally on May 5, 2016 in Charleston, West Virginia.    BRENDAN SMIALOWSKI/AFP/Getty Images

President Trump has very specific talking points when it comes to jobs in the U.S. They go kind of like this: China — bad. Mexico — bad. Outsourcing — bad. Made in America — great. Hiring American — even better.

Trump and his supporters have spent a lot of time focusing on trade policies and how to bring back jobs lost to globalization, but experts say most of those jobs are not coming back. The key issue facing the American workforce — and therefore America’s prosperity and stability moving forward — is not trade, but technology.

Yet, Trump has spent little time talking about how technology —  be it robots or artificial intelligence — are affecting jobs in America. Most often, the 45th president of the United States can be found railing against international trade deals and outsourcing, both of which he considers job killers.

That might be easier said than done considering that the jobs that were typically outsourced no longer exist. Mostly, this is due to the technology that automated many of the factory jobs over the last couple of decades. But robots don’t make for good political targets.

The threat does exist. Robots are coming after our jobs — or a portion of our jobs. How soon, however, is still up for discussion. According to Treasury Secretary Steven Mnuchin, it will be at least another 50 to 100 years before robots come for America’s jobs.

“I think that is so far in the future — in terms of artificial intelligence taking over American jobs — I think we’re, like, so far away from that that [is] not even on my radar screen,” Mnuchin said in a recent interview with Axios.

It may be sooner than he thinks.

“Our scenarios suggest that half of today’s work activities could be automated by 2055, but this could happen up to 20 years earlier or later depending on the various factors, in addition to other wider economic conditions,” according to a report from McKinsey Global Institute released in January.

The tasks within a job that are most likely to be automated involve physical activity in “highly structured and predictable environments” and data collections and processing, researchers said. These tasks make up 51 percent of tasks in the U.S. economy and account for nearly $2.7 trillion in wages.

While Trump’s White House is not too worried about robots, other politicians, like Jeb Bush, are starting to sound the alarm. The former Florida governor is concerned about the education and job training provided to future workers, which he said need to be modernized.

“I think the president can lead in this regard and create a national consensus that the looming challenge of automation and artificial intelligence and the rapid advancement of technology brings great benefits, but it also creates huge challenges,” Bush said in an interview on AM 970 in New York. “[T]he number of jobs that will be eliminated because of artificial intelligence and automation, it’s real. This is not something that’s science fiction. This is happening as we speak. And yet we still have this big skills gap.”

One industry that has seen automation take a toll is manufacturing. Much of the work involves physical activity in a structured environment, making it primed for automation.Since 2000, more than 5 million manufacturing jobs have been lost. Last year, about 8 percent of U.S. workers worked in manufacturing — down from 24 percent in 1960, according to CNN. And while offshoring and outsourcing of jobs to places like China and Mexico contributed to the decline of manufacturing jobs in the U.S., experts and those in the industry point out that automation is one of the main drivers behind that decline.“The U.S. is hanging on to this idea that manufacturing is important, but it’s going the way of automation,” said Joshua Robinson, president and CEO at ITI, a Houston, Texas-based company that helps others set up manufacturing operations in China.

According to Robinson, 15 years ago, four to five people would be required to operate a molding machine that makes generic plastic parts.

“Today, it takes maybe one person to operate two or more of those machines,” he said. “The U.S. is the most advanced country in the world. These jobs that people are clamoring for and are so upset about moving — they are not coming back here … if they came back, they would be automated.”

If McKinsey’s estimates are correct, the job market of 2035 could look completely different from the job market of today. If manufacturing goes the way of robots and maybe other jobs, like toll collection and tax preparation, too — what jobs will be left for the rest of us?

There are certain jobs that are robot-proof, meaning that the duties and tasks involved cannot be fully automated, according to the McKinsey research. One of those jobs is teaching.

“That fear is not something that I worry about because there are certain things that we do in the classroom that cannot be replaced by a machine,” Angela Tedora, a teacher at the Madison Charter Township in Michigan, told Marketplace’s David Brancaccio recently when he went on the road trying to find robot-proof jobs.

Teachers might be robot-proof, but the jobs they are preparing their students for might not be. When those students enter the job market in 10 to 20 years, the jobs available might look much different than they do today. Recently, teachers at Tedora’s school had a professional development day at the school where they discussed the jobs that the kids at the elementary school level might have one day.

“The jobs that we’re preparing them for haven’t even been created yet, and really, that’s a hurdle that we need to figure out how to get over, because how do you prepare them for the unknown?” she said.