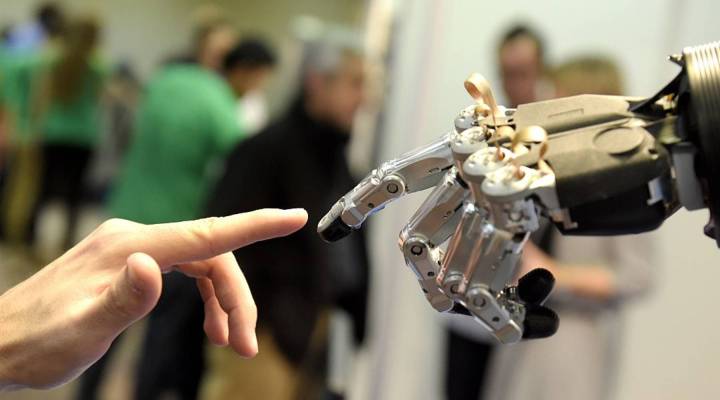 Five years ago, Marketplace explored the ways in which machines, robots and software algorithms were increasingly entering the workforce in our series “Robots Ate My Job.” Now, we’re looking at what humans can do about it with a new journey to find what we’re calling “Robot-Proof Jobs.”

President Donald Trump is set to meet with Chinese premier Xi Jinping in Florida this week. A key topic, beyond North Korea, will be the U.S. administration’s pushback against globalization.

Bringing jobs back from overseas is a central piece of the Trump agenda. However, one of the biggest challenges facing the American workforce may not be competition from other countries, but something domestic: technology. Machines and algorithms are getting pretty good at doing parts of our jobs.

This month on Marketplace, we’ll look at this from a variety of angles, with a focus on how human workers and human policy may need to adapt to tech. To kick it all off, a conversation with Martin Ford, a futurist and author of the book “Rise of the Robots: Technology and the Threat of a Jobless Future.”  Below is an edited transcript of the conversation.

Martin Ford: Artificial intelligence and robotics really seem to be reaching a point where we’re really seeing an acceleration, what you might call an inflection point. Things are really beginning to drive upward. It is going to have a huge impact across the board. This is all happening not just because of technology but because of the interaction of technology and the market. There has always been a powerful incentive in capitalism to save on labor, to do something more efficiently. Historically that’s been a good thing, that’s what’s made us richer. Historically, what we’ve seen is that technologies have had a big impact in one area of the economy. For example, think about what mechanization did to agriculture.

David Brancaccio: Yes, machines in the 19th century wiped out virtually all of those jobs.

Ford: That’s right, but it was one sector of the economy. It was just agriculture, and that meant the whole rest of the economy was out there to absorb those workers. Of course, people lost their jobs on farms, but then they found jobs in factories. Now what we’re going to see is more of a general purpose wave of technology, almost like a utility. Many people compare artificial intelligence and information technology to electricity. I mean, you wouldn’t ask what industries are most impacted by electricity. The answer is obviously everything.

Brancaccio: And you must see an irony here. When it comes to national politics, the debate right now is not about robots, AI and algorithms, it’s about trade. It may be that it’s the technology we should be spending time focusing on in terms of the direction of the labor force.

Ford: Technology is probably the most important force already, and that’s going to become even more true in the future. It’s going to overwhelm the impact of globalization. In fact, you already see some factories coming back to the United States, but what happens is that when the factory comes back to the U.S. it’s almost entirely automated. Initially the jobs that are most likely to be impacted are those that are on some level routine and repetitive — if you’re facing the same challenges, or if your job is even a little bit boring from day to day, then you should be a little bit worried that at some point technology is going to reach the point where [your job] is going to be threatened.