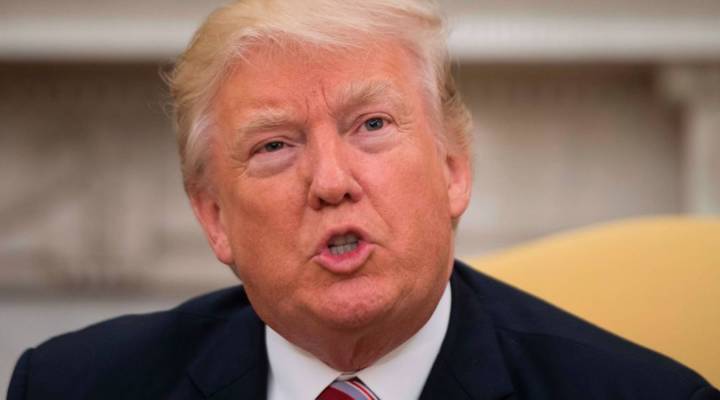 COPY
President Trump told The Economist that an increase in the deficit would essentially be “priming the pump.” JIM WATSON/AFP/Getty Images

President Trump told The Economist that an increase in the deficit would essentially be “priming the pump.” JIM WATSON/AFP/Getty Images
Listen Now

Some presidents have economic policies so closely intertwined with their administration that they get a portmanteau named after them. Think Reaganomics and trickle-down theory.

President Trump, along with Treasury Secretary Steven Mnuchin and Gary Cohn, the director of the National Economic Council, sat down with The Economist to talk about his approach to global trade, tax reform and health care.

“In his definition, Trumponomics is really primarily about the economic nationalism side, the trade side,” Zanny Minton Beddoes, The Economist’s editor-in-chief told us.

Below are some highlights of Trump’s talk with the publication, along with Beddoes’ analysis.

Trump said there needs to be more reciprocity between countries and a “massive” renegotiation of the North American Free Trade Agreement.

Throughout his campaign and presidency, Trump has spent a lot of time talking about how to bring back jobs lost due to globalization.

In the interview, Trump questioned if the U.S. had “any good trade deals” and pointed out the billion-dollar trade deficits with Mexico and Canada. But details on the changes he’d enact were a bit sparse.

“He’s quite difficult to follow sometimes when you get to specifics,” Beddoes said. “But I did get the very clear sense that it had to be big. But he also said it could be flexible.”

Beddoes, when evaluating Trumponomics as a whole, said it has the potential to be dangerous.

“I think there’s an internal inconsistency in Trumponomics, if you will. Because on the one hand, the president wants to get trade deficits down. On the other hand he wants to get more investment and foster growth,” Beddoes said. “And both economic logic and history suggest that if you’re going to have a boom in investment, you are likely to have a larger trade deficit in the short term.”

Beddoes added that Trump’s view of the economy struck her as “old fashioned” and lacked focus on the deeper challenges America’s workforce is facing, like automation.

The president has promised big tax cuts for businesses, saying he wants to reduce the corporate rate from 35 percent to 15 percent. That, however, could increase the country’s deficit.

Trump said he was fine with the increase because it would be essentially “priming the pump” — a practice that involves government spending to stimulate the economy (and a phrase Trump said he coined, though Quartz has a different view).

“You have to put something in before you can get something out,” Trump told the publication.

The economy seems to be fairly strong at the moment, though. The April unemployment rate dipped to 4.4 percent, its lowest point in a decade.

In Keynesian economics, pump priming is thought of as a tool to get an economy out of recession, Beddoes noted.

Trump said Obamacare is “dead” during his conversation with The Economist.

He argued that his health care plan would be better because it would result in low premiums and deductibles.

Last Thursday, the same day as The Economist interview, the House of Representatives passed a GOP-backed health care replacement bill. It now needs to get through the Senate.

In response to warnings that many would lose coverage under the GOP’s plan, Trump said there would be a pool starting at $8 billion for those with financial difficulties.

He also added states would do a better job handling health care than the federal government. But during the interview, Trump argued that the concept behind Obamacare is still important.

Trump said he doesn’t want that to end “for the people that already have it.”

You can read a full transcript of The Economist’s interview here.