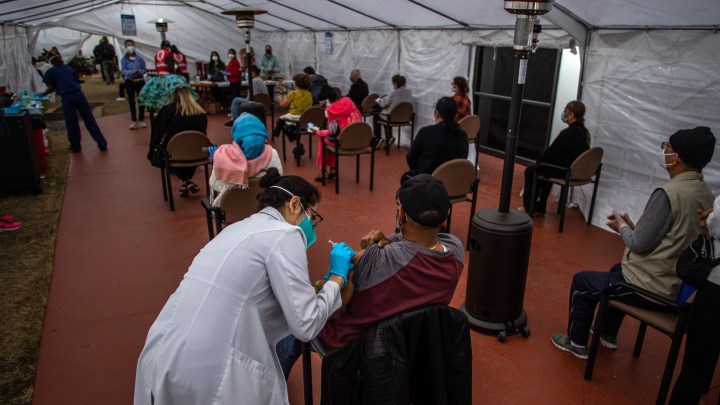 Vaccination rates have been steadily climbing in the U.S. and parts of Europe, but many poorer, developing countries as well as parts of Asia have been falling behind.

This means those countries may fall behind in the global race to economic recovery, according to Zanny Minton Beddoes, editor-in-chief of the Economist magazine.

“We’re going to see this very interesting bifurcation that probably we haven’t paid enough attention to, which is a stronger recovery in the vaccinated countries — much stronger, much more resilient — and a weaker recovery in the less vaccinated countries,” Minton Beddoes said in an interview with “Marketplace Morning Report” host David Brancaccio.

Below is an edited transcript of their discussion about how inequality could worsen between developed countries and developing countries with low vaccination rates as well as potential capital flight, which could lead to higher interest rates in many nations and other economic troubles.

David Brancaccio: You’re in New York after the long lockdown absence. And, you know, more and more people in the U.S. and some other countries [are] getting vaccinated, but the vaccination rates are by no means even globally, are they?

Zanny Minton Beddoes: They aren’t, and yes, I am in New York. I’m in the U.S. for the first time since February 2020. And never have I been so excited about getting on a transatlantic flight. I’m delighted to be here. It’s wonderful to be back on this side of the Atlantic. And it feels like a country that is putting COVID behind it in a very palpable way. And that’s increasingly the case in the U.K. too. It’s increasingly the case in those countries which have high vaccination rates. And the result, as you say, is we have a new fault line in the world economy, I think, increasingly between the “jabs” and the “jab-nots.” Those countries that have much lower vaccination rates have the risk of future outbreaks, they are unable to ease lockdown as easily, and that means that their economic recovery is weaker. And we’re going to see this very interesting bifurcation that probably we haven’t paid enough attention to, which is a stronger recovery in the vaccinated countries — much stronger, much more resilient — and a weaker recovery in the less vaccinated countries. And unfortunately, those countries disproportionately are the poorer countries.

Brancaccio: And look what happens to the flows of global capital if that’s allowed to continue. Because in the places where more people are vaccinated, the U.S., interest rates are going to trend upward. That’s going to make returns in this country for investors a bit more attractive, and they might take their money out of the countries where the vaccinations are lower, further strangling some of those countries overseas?

Minton Beddoes: Well, that is definitely a risk. Clearly, the biggest macro question globally, I think, is how soon will the U.S. start to raise interest rates? And we’ve had a lot of talk about that in the last week, more talk coming up in the next few days, as we hear from [Federal Reserve] governors. And I think the question of how quickly the U.S. moves, or even moves towards moving, will set the stage for whether or not we have a repeat of, remember the “taper tantrum” a couple of years ago, a few years ago actually, where there was a big reduction in global bond markets, global financial markets, because of expectations of what the U.S. would do?

But yeah, you’re right, the broad economics is, if the U.S. economy is roaring along, even a dovish Fed at some point will raise rates. And it’s clearly indicated that it’s leaning to do that sooner than people thought a few weeks ago. The expectation of higher rates in the U.S. sucks capital into the U.S. away from other parts of the world, strengthens the dollar. It means that it is harder for those countries that borrow in dollars that have to worry about capital fleeing from their countries. They then have to raise interest rates to stop that capital going. And so you might have the weaker economies, the less vaccinated parts of the world where economic growth is weaker and the outlook is a bit darker, facing that terrible vise that emerging economies often face of having to tighten even though their economies are weak. So they may, you know, jab later but hike too soon.

Brancaccio: And this is even a phenomenon for some of the more industrialized countries. You think of places like Korea and Japan that were seen as managing their pandemic fairly well. But the vaccination rates lag, and you think that there’s going to be extra suffering, certainly at a human scale, but also at the economic level?

Minton Beddoes: Yeah. I think one of the really interesting developments is what’s going on in East Asia right now, East Asia and Southeast Asia, because many of those countries, you’re right, handled the pandemic incredibly well. They were in fact, they were sort of the poster child for countries that had managed the pandemic, lost relatively few lives, kept outbreaks under control, you know, Taiwan and South Korea, etc. They have, as a result, the last year was sort of less dreadful for them and for their economies than for many of the rest of us. But they have been slower about vaccinating. And as a result, their economies are more vulnerable, travel is much harder and they, I think, will suffer and are suffering. You see it actually in their economic growth recently, relative to, say, the bounce back in the U.S. and in parts of Europe. And it’s also, of course, partly to do with the scale of stimulus. That’s the other factor in this we haven’t discussed, you know. We’re seeing the consequence of huge amounts of stimulus in the U.S. and in continental Europe. But there is a growth gap emerging relative to what one might have expected. So I’m not sure that people have sensed how Asia, Southeast Asia, is doing less well than you might have thought six months ago.