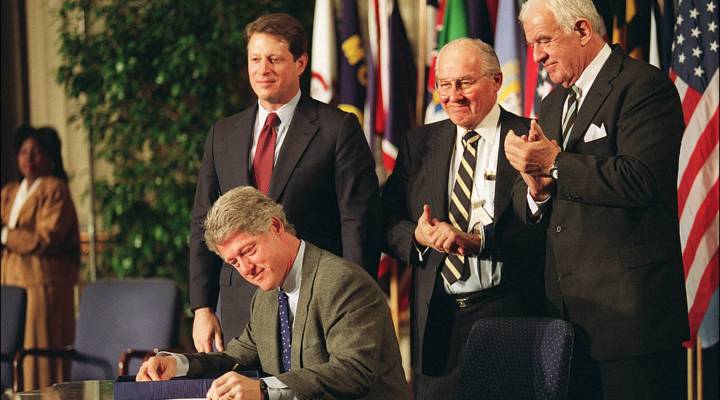 An awful lot has been made of manufacturing jobs America has lost since signing the North American Free Trade Agreement. The number 6 million is often bandied about. But how many of those were actually caused by NAFTA? In other words, what would the world have looked like without NAFTA?

This is our “what if” scenario, also known as a thought experiment. Or, if you’re being very fancy, a “counterfactual.” But really, it’s the George Bailey question from the classic movie “It’s a Wonderful Life.”

George Bailey: “I suppose it would have been better if I’d never been born at all.”

Clarence the angel: “What did you say?”

We have no low-ranking angel named Clarence to reveal this to us. But we do have professors who find the evidence telling. Even without NAFTA, one big job-killing wave would have hit anyway: machines.

“There is an element of truth that free trade has destroyed jobs in American manufacturing,” said Mauro Guillen of the Wharton School at the University of Pennsylvania. “But most of the jobs, up to 80 percent, have been destroyed by technology.”

As in, ATMs replacing bankers, robots displacing welders. Automation is a very old story that goes back 250 years, but it has really picked up in the last couple decades.

“We economic developers have an old joke,” said Charles Hayes of the Research Triangle Regional Partnership in an interview with Marketplace in 2010. “The manufacturing facility of the future will employ two people: one will be a man, and one will be a dog. And the man will be there to feed the dog. And the dog will be there to make sure the man doesn’t touch the equipment.”

Ouch. But it turns out technology replaced workers in the course of reporting this very story.

I interviewed political scientist Cullen Hendrix at the University of Denver and recorded his voice with a cell phone app — that’s it.

“This interaction between you and me over this app probably would have involved at least one staff person setting things up. Or a recorder to make sure it happened. All of that has been lost to automation.” And this automation had nothing to do with NAFTA.

“We are in the midst of a sea change, driven by technology that is radically altering the face of the U.S. economy,” Hendrix said. “And clobbering Mexican workers is not going to solve that issue.”

There’s another big force affecting manufacturing jobs that would have struck, even if NAFTA had not been born. That would be China.

The impact of China in displacing U.S. jobs has far outweighed that of Mexico.

“NAFTA gets blamed for a lot of ills in the U.S. economy, and I think unfairly,” said economist Gordon Hanson of the University of California, San Diego, co-author of a defining study on what’s called the China Shock. “Mexico’s production capacity just isn’t that big.”

China, by contrast, has an economy the size of nine Mexicos. And its exports are the equivalent of six Mexicos.

“The China effect overwhelmingly dominates,” Hanson said. “And it’s not hard to understand why. Growth in Chinese manufacturing exports has simply been stupendous.”

But again, most independent economists believe outsourcing has been swamped in the NAFTA years by the job-killing effects of machines and software. Yet many find it unsatisfying to blame soulless electrons.

“Human beings tend to blame who they dislike for their problems,” said George Mason University economist Bryan Caplan, author of “The Myth of the Rational Voter.” “So if you stub your toe, who do I dislike that I might possibly blame for this? And in particular, what’s very striking is they tend to be foreigners who are more different from you. So it’s very rare that we go and talk about Canadians taking our jobs.

As for NAFTA and the George Bailey question from the movie: If the trade deal were never born, our angels have suggested not much would have changed. The jobs would have left Bedford Falls anyway.