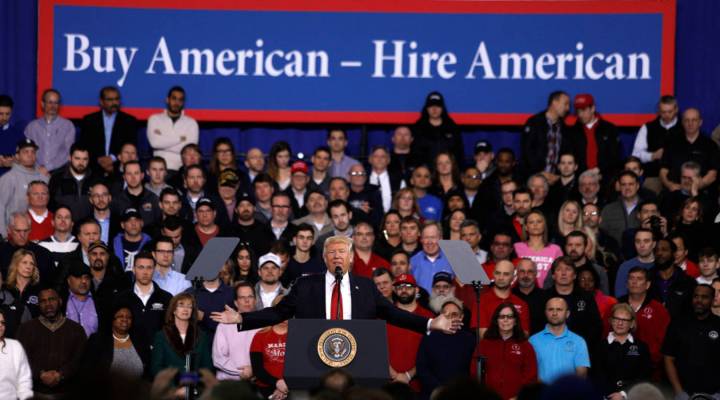 COPY
Economists estimate that NAFTA has raised U.S. GDP by one half to one percentage point. Above, President Donald Trump, who campaigned on keeping jobs in the U.S., speaks to autoworkers in Ypsilanti, Michigan. Bill Pugliano/Getty Images
NAFTA Explained

Economists estimate that NAFTA has raised U.S. GDP by one half to one percentage point. Above, President Donald Trump, who campaigned on keeping jobs in the U.S., speaks to autoworkers in Ypsilanti, Michigan. Bill Pugliano/Getty Images
Listen Now

What did the North American Free Trade Agreement do?

Donald Trump and Bernie Sanders, who both used NAFTA as a favorite target during their presidential campaigns, will tell you it was a “disaster” for the U.S. economy, that it cost the United States hundreds of thousands of jobs.

The reality is not nearly as dramatic or tidy a story. One thing that NAFTA is probably not is the big deal many people make it out to be.

“For the U.S., NAFTA mattered, but it wasn’t this transformational thing,” said Gordon Hanson, acting dean at the School of Global Policy and Strategy at University of California, San Diego. “It has an outsize importance in the U.S. debate about trade policy relative to its actual economic impact.” He points out that when Mexico entered NAFTA, its economy was the size of Ohio’s.

“So freeing trade with Ohio is a thing that economists would argue is good on net for the United States, but it’s not transformational,” Hanson said.

Economists estimate that since the trade agreement went into effect in 1994, it has raised U.S. gross domestic product by one half, possibly one whole percentage point.

We talk so much about NAFTA, argue many economists, because it’s become a symbol of things much greater than itself – namely, globalization.

“NAFTA’s got blamed for stuff that it in no way could have been at fault for,” Hanson said.

A good example of this is fabric and clothes. As part of NAFTA, the U.S. made a deal with Mexico. It said, “Listen, we will drop barriers on Mexican clothes if you use American fabric to make them.” So that way, Mexico would get jobs making clothing, and America would get jobs making fabric.

“Fabric production in the United States rose substantially after NAFTA,” said Noel Maurer, associate professor of international affairs and business at George Washington University. “But jobs continued to decline because automation was wiping out jobs.”

So those jobs went to robots. Not really NAFTA’s fault.

On the Mexican side, Mexico was ready to start stitching up a storm.

“But instead, a lot of the expected benefits from NAFTA for Mexico went away because China suddenly entered the world market,” Maurer said.

China took those stitching jobs. Again, nothing to do with NAFTA.

Monumental things have happened to the U.S., Mexican and global economies since NAFTA went into effect. Mexico had a peso crisis, making Mexican exports cheaper. There have been two recessions and growth surges — manufacturing in the U.S. grew by 250,000 jobs after NAFTA, simply because the economy was booming.

Trying to figure out NAFTA’s role among all that noise, especially when it comes to job creation and job loss, is pretty hard.

“People fight about that all the time,” Maurer said. Putting the number of jobs gained versus number of jobs lost versus wages in new jobs versus old jobs all into some kind of ledger “is really, really hard. I don’t know of any that are really credible,” he said.

Most economists who have studied the issue argue that NAFTA’s effect on the net number of jobs was minimal. If you assume the worst about NAFTA, and assume (incorrectly, most economists would say) that the entirety of the U.S. trade deficit with Mexico is caused by NAFTA and that this trade deficit represents goods that should be made in the United States by American workers, “with that kind of calculation, you’d get something on the order of 150,000 jobs in U.S. manufacturing” lost due to the trade agreement, according to Robert Lawrence, professor of government at Harvard’s Kennedy School.

Lawrence emphasizes that this calculation is based on flawed assumptions, but points out that 150,000 jobs is a rounding error in an economy that gains or loses that amount of jobs in a month.

So what, then, can we say NAFTA actually did?

“NAFTA helped the U.S. auto industry survive,” said Hanson of UC San Diego. “The U.S. auto industry designed a very efficient production network that spanned the U.S., Mexico and Canada.” Cars and car parts are no longer just made in the U.S., they are made across multiple borders, extremely efficiently, “allowing the U.S. to compete more effectively with the rapidly growing and improving auto industries in Europe and Asia,” Hanson said. The U.S. aerospace benefited in the same way, he said.

Other industries didn’t do so great when they were exposed to competition from Mexico. Apparel, rug making, brick making, furniture making, “these are industries we don’t generally think about when we think of the U.S. as an advanced industrial economy, but they provided a lot of jobs,” said GWU’s Maurer.

This comparison of industries that won and lost helps make sense out of the confusion over job loss due to NAFTA. The trade agreement caused both job loss and job gain.

“I think we can say with a lot of assurance that we have a different mix of employment because of NAFTA,” said Josh Bivens, director of research at the Economic Policy Institute. We lost low skilled jobs for non-college educated Americans in rugs or furniture making or brick making. We gained design and business services jobs in autos and aerospace.

“That change in the mix of employment has been generally not good for non-college labor in the United States,” Bivens said.

Then again, neither has automation, the move to a services-based economy, the decline of labor unions and globalization generally.

“NAFTA is just this very visible political symbol that people take as the stand-in for all the pressures globalization put on American workers,” said Bivens, who remains critical of NAFTA and policymakers for failing to protect the workers who lost out as a result of the trade agreement and economic changes that came after it.

Hanson goes further in describing NAFTA as a whipping boy for globalization.

So what did NAFTA do? It created jobs, cut jobs and gave people a name for their frustrations — deserved or not.