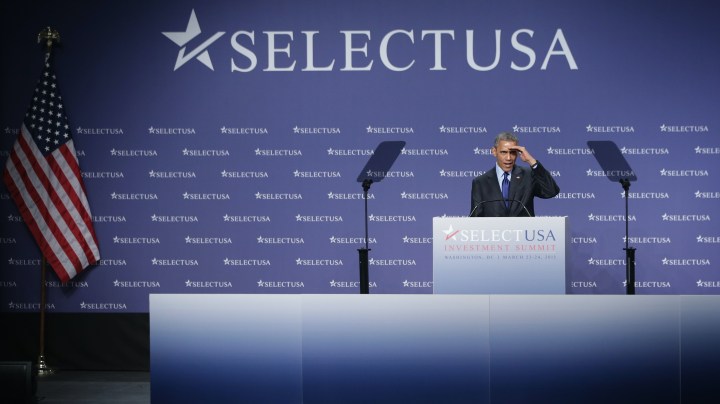 COPY
Then-President Barack Obama speaks at the SelectUSA Investment Summit in 2015. This year, the trade show will be online-only. Alex Wong/Getty Images

Then-President Barack Obama speaks at the SelectUSA Investment Summit in 2015. This year, the trade show will be online-only. Alex Wong/Getty Images
Listen Now

The Commerce Department started its weeklong SelectUSA trade show Monday. The event is designed to attract foreign direct investment to the U.S., that is, persuade international companies to set up factories or offices here.

Select USA was canceled in 2020 because of COVID-19, and it’ll be online this year. But even in nonpandemic times, what’s the lasting effect of this investment?

The Commerce Department took a look at foreign firms that operated in the U.S. from 1989 to 2016 and discovered that most had fewer than 500 employees. And only 37% of them survived. This doesn’t surprise Christine McDaniel, a senior research fellow at the Mercatus Center. “Going global is really hard,” she said.

She said there are a lot of reasons for that. “Unfair competition, complex regulatory environments, challenging approval processes, corruption and lack of financing.”

Eight small businesses from Japan are trying to leap that last hurdle — lack of financing — by banding together. They formed a consulting company called Hatsu Japan.

“They are sharing everything. The rent, paying me,” said Mika Fox, who represents Hatsu in the U.S. Fox said Hatsu advises other small Japanese companies that hope to set up shop in the U.S.

But six months ago, Hatsu had to close its U.S. office, located in Boise, Idaho, because of COVID-19. It’s hoping to open up again soon.

Fox said one of Hatsu’s founding members is partnering with the University of Idaho in a separate venture.

Turns out, foreign firms with U.S. ties are more likely to survive. Say, if they’re a supplier for an American customer.

“If you are asked to come because a major customer is here in the U.S., I think your chances of success are higher,” said Mary Lovely, a senior fellow at the Peterson Institute for International Economics.

Lovely said successful foreign firms create jobs for Americans. And according to the Commerce Department, in 2019 they invested about $195 billion in the U.S.