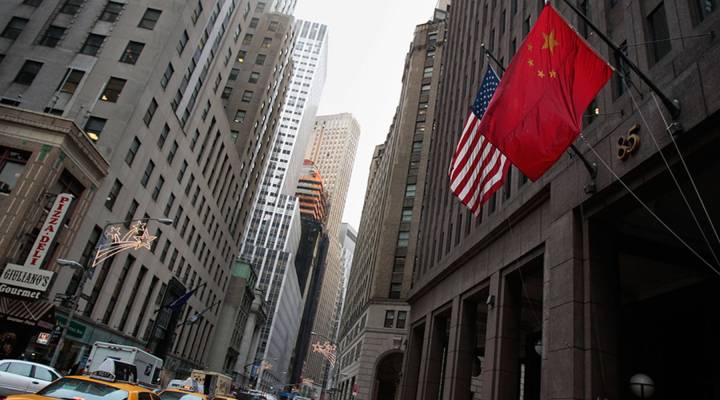 COPY
The flag of the People's Republic of China hangs next to an American flag in New York. Chris Hondros/Getty Images

The flag of the People's Republic of China hangs next to an American flag in New York. Chris Hondros/Getty Images
Listen Now

In 1975, President Gerald Ford created a committee to oversee foreign investment in the United States. His executive order was prompted, in part, by significant inflows of oil money from places like Saudi Arabia and Iran to buy U.S. companies, said Matthew Baltz, a professor at Bucknell University.

But for its first decade, the Committee on Foreign Investment in the United States, known as CFIUS, didn’t have much bite.

Baltz said it met infrequently and didn’t review many cases until 1988, when Congress formalized its authority and review procedures. By then, another country was prompting new worries — Japan.

Today, a different country is prompting even bigger concerns.

“The origins and even the details of this bill say China pretty much everywhere,” said Stewart Baker, a partner at the law firm Steptoe & Johnson.

Both houses of Congress have been considering how to limit Chinese investment in critical technologies, like mobile broadband and semiconductors.

The Foreign Investment Risk Review Modernization Act is likely headed for a vote in the Senate Banking Committee on Tuesday. If passed, could significantly increase oversight and scrutiny of foreign deals that have national security implications for the United States.

“We have never had a peer competitor, an economy that was as big as ours, that was run by the government and, in particular, that could say, ‘I want you to invest in the following 20 technologies so that we can catch up with the U.S. military lead,’” Baker said.

FIRMMA would give CFIUS new powers and new funding. For example, it would oversee foreign investments in real estate near military facilities or deals that could expose sensitive data about U.S. citizens to foreign governments.

Currently, CFIUS reviews only apply to deals where a foreign firm buys or takes of control of a U.S. company. In order to close that loophole, this bill would build on an existing export control process, overseen by the Commerce Department, to cover other types of deals, such as joint ventures.

“That’s the part I find most fascinating. They’re looking at other situations,” said Gregory Husisian, chair of the export controls and national security practice at the law firm Foley & Lardner. “By requiring a kind of licensing scheme, they can potentially slow down or block the transfer of very important economic and national security type of information.”

While the Commerce Department already grants export licenses for dual-use technology — civilian tech that could also have military uses — this bill could add oversight of critical, next-generation technology as well.