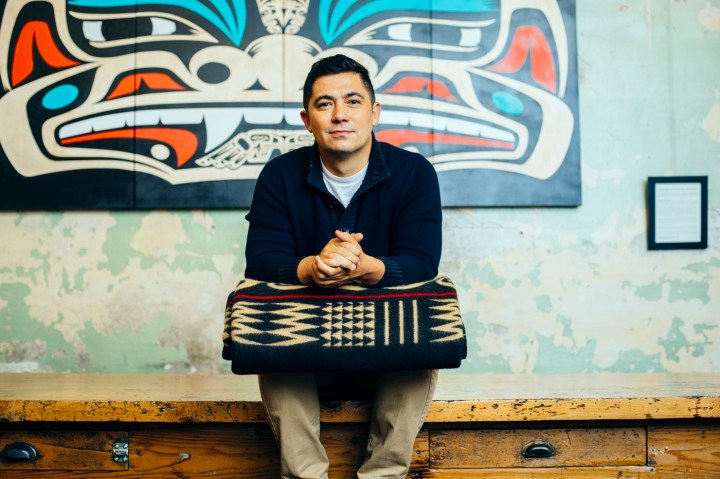 COPY
"What we have learned during the pandemic is that we can be confident in consumers' interest in doing the right thing," said Louie Gong, founder and CEO of Eighth Generation. Courtesy of Ken Yu/Eighth Generation
Back to Business

"What we have learned during the pandemic is that we can be confident in consumers' interest in doing the right thing," said Louie Gong, founder and CEO of Eighth Generation. Courtesy of Ken Yu/Eighth Generation
Listen Now

When the pandemic hit Seattle last year, Eighth Generation, a Native-owned arts and lifestyle brand that works exclusively with Native artists, was gearing up for a big year. A few months earlier, founder and CEO Louie Gong had sold the company to the Snoqualmie Tribe, and he was excited about the growth opportunities that came with the new ownership.

“Now, decisions at this company will be made by hundreds of local Indigenous people,” said Gong, who is a member of the Nooksack Tribe and who stayed on as CEO with the new ownership. “By selling the business to the Snoqualmie Tribe, we’ve put some muscle behind the hustle. And that’s really important as we scale up and start to compete with larger companies.”

Eighth Generation was born more than a decade prior out of a desire to create opportunities for Native artists. Gong — an artist himself, who at the time was creating custom designs on Vans and Converse sneakers reflecting traditional Coast Salish art and his mixed-race heritage — recognized that many Native artists struggled to reach customers on their own terms, outside of galleries and big corporations without Native ownership.

“It’s really important to make as many opportunities for Native artists as possible, because Native artists, for centuries, have been marginalized and blocked from participating in the commerce around products,” he said in an interview with “Marketplace Morning Report” host David Brancaccio.

He also wanted to create an alternative to a glut of culturally appropriative products featuring “Native-inspired” designs sold by companies without Native ownership — which have made it difficult for Native-owned companies to break into the market. Wool blankets, for instance, are culturally significant items in many tribal communities, but Gong says that until Eighth Generation started making wool blankets in 2015, there were no Native-owned businesses for tribes to buy from.

“One thing that a lot of people don’t realize is that, for hundreds of years, almost all of the products featuring Native art that have been sold have fake Native art on them,” he said. “What Eighth Generation wants to do, in addition to pursuing regular types of currencies — like you know, a business has to make money — we also pursue currencies like reclaiming the narrative about our own people.”

Last spring, the pandemic forced Gong to close the brick-and-mortar store in Pike Place Market and send the majority of employees to work from home. To ensure there was enough money to keep everyone on payroll through the uncertain period, he put a lot of things on hold.

“We froze ordering new inventory, we froze new hires, we froze infrastructure development. And we were really scared,” he said.

As sales plummeted, the team focused on bolstering Eighth Generation’s online store. They also leveraged existing relationships with suppliers in China to secure over 10,000 N95 respirators, surgical masks and face shields for the Seattle Indian Health Board, which was in dire need of personal protective equipment, at a time when state and federal governments were failing to provide it.

By the summer, Eighth Generation’s online orders picked up as racial justice protests swept the country and consumers focused more on supporting businesses owned by people of color. Their temporary pause on ordering new inventory caught up to them, and by December, 70% of their products — including their wool blankets, which might have a six-month production timeline — were sold out.

“Although we had a great year, it probably would have been a lot better had we not had to freeze orders for several months during the time that we would have been reordering for the holiday season,” Gong said.

As the economy reopens, Gong is eager to build on the momentum of the last year. Eighth Generation’s brick-and-mortar store is open again, with a reduced schedule for now. And the company will soon expand its Urban Manufacturing Initiative, which has so far included wool baby blankets and scarves produced from sketch to final product in its Seattle studio, to full-size blankets (they will continue working with third-party manufacturers on other blankets in order to offer different price points).

“What we have learned during the pandemic is that we can be confident in consumers’ interest in doing the right thing,” Gong told Brancaccio. “We found that people were paying a lot closer attention to whether or not the way they use their money was reinforcing their values or undermining their values. And I think that’s sustainable beyond the pandemic, beyond this rush to support businesses owned by people of color.”