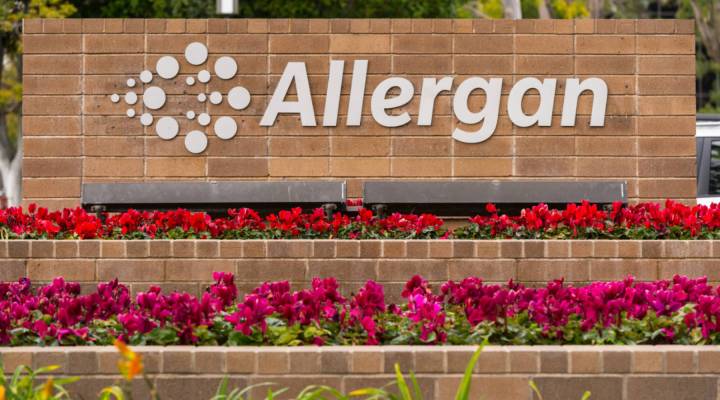 COPY
A view of an Allergan site in Irvine, California. Via Allergan

A view of an Allergan site in Irvine, California. Via Allergan
Listen Now

It’s tough being a pharmaceutical company when your patent rights run out — the generic competition rushes in, and profits go down on a drug that you may have spent time and money to develop way back when.

But the drug company Allergan has been doing some creative thinking about this when it comes to an eye medicine called Restasis. They’re transferring the drug to a Native American tribe in upstate New York.

Veteran business columnist Joe Nocera, who wrote about the topic in Bloomberg View, stopped by to explain how this move works and what’ll happen to the availability of generic drugs if other companies start doing this. Below is an edited transcript.

David Brancaccio: So how are the good people of the St. Regis Mohawk tribe going to help Allergan?

Brancaccio: Now, in your column, you know that there are voices on Wall Street who seem to cheer this cool maneuver.

Nocera: Wall Street wants companies like Allergan to be able to maintain monopoly prices on brand name drugs. I mean, this is the really important part. Restasis has been on the market since 2002. Its original patent ran out in 2014. So there should have been generics on the market three years ago. But, companies now have learned that what you do is you make a little change in the dosage, you make a little change here, you make a little change in the formula. And you put a whole new bunch of patents around it, and you try to extend the patent life another 12 years or another 10 years. But, truly, it violates — at the minimum — the spirit of the law that basically says generics should be able to come in and give the American public cheaper prices. This is one reason, by the way, that health care costs so much.

Brancaccio: Now the pharma companies will say, “OK, you’re just looking at this one drug. In this case, Restasis. We spent tons of money trying to develop other drugs that failed. So this is one way we can recoup some of that.”

Brancaccio: Part of the trouble here is that there are several sets of laws. One, the Native nation and one, the laws of the United States.

Nocera: Well, that is true. And I should note that this maneuver — which is what it is  — will be challenged. But if Allergan succeeds in doing this, I can guarantee you that the Native American tribes around the country are all going to get into the patent business, and every drug company on earth is going to start transferring patents to Native American tribes. So it really could put a damper on the generic business.