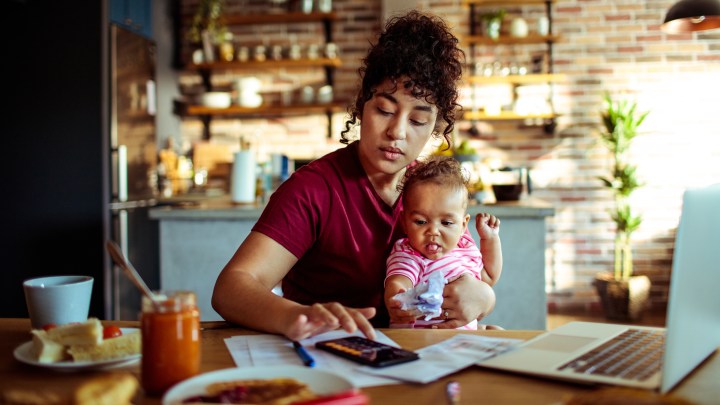 COPY
The U.S. is the only wealthy country without paid family leave. vorDa via Getty Images
Workplace Culture

The U.S. is the only wealthy country without paid family leave. vorDa via Getty Images
Listen Now

More than 200 companies — including big ones like McDonald’s, JPMorgan and Uber — have formed a coalition with the advocacy group Time’s Up. They’ll promote policies that support caregivers and help women get back to work.

More than 2 million women left the labor force during the pandemic as remote schooling and day care disruptions kept kids at home. The new Care Economy Business Council is pushing for government policies to address this crisis, including paid family leave.

It’s a different kind of role for big business, which has sometimes opposed these very policies.

“So many women that were job seeking with us did have to step away from their job search. Most of them didn’t want to,” she said.

Keefe joined the Care Economy Business Council and believes the private sector needs to speak up about the lack of care infrastructure.

But businesses haven’t always been keen on the idea of government taking this over.

“They say it’s a job killer,” said Eileen Appelbaum, who has studied California’s paid family leave policy at the Center for Economic and Policy Research.

When California’s six-week leave was adopted in 2002, business groups opposed it. But Appelbaum found that six years on, their fears were unfounded: “They told us productivity went up. Everybody told us morale went up.”

Family-friendly policies can inspire employee loyalty and reduce turnover, but they can be costly for smaller companies, according to finance professor Elena Patel at the University of Utah.

“A federal paid leave policy makes it easier for businesses to offer what we think is a really highly demanded sort of job benefit,” she said.

The U.S. is the only wealthy country without paid family leave. Because of that, such benefits have traditionally been seen as perks, said Caitlyn Collins, a sociologist at Washington University. “Here in the United States, we think of caregiving and families in general as a private and personal responsibility.”

But Collins said big business could start to change those attitudes by embracing caregiving benefits as an economic and public good.