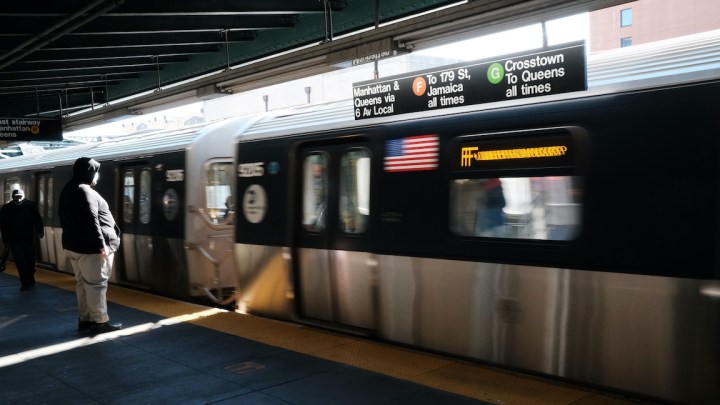 COPY
The CDC says everyone should still where masks on public transit. Spencer Platt/Getty Images

The CDC says everyone should still where masks on public transit. Spencer Platt/Getty Images
Listen Now

The New York City subway resumed 24-hour service Monday after more than a year of overnight shutdowns to give workers more time to clean and disinfect trains. It’s a huge step in the city’s return to pre-pandemic normalcy. Subway ridership is picking up, but it’s still only about 35% of what it once was. Overall ridership is similar in other transit-dependent cities like Chicago and San Francisco.

What will transit systems need to do to lure riders back?

Studies haven’t linked COVID-19 outbreaks to public transit. But the thing that defines subways and buses — crowds in tight spaces — means one of the biggest hurdles in regaining ridership is public perception.

“You know, walk around the transit system, and they pass out masks and just make it feel so welcoming and safe,” she said.

The Centers for Disease Control and Prevention says everyone should still wear masks on public transit.

“Once large crowds return to the subway, I think we’ll see less crime because there’ll be less opportunity,” Kaufman said.

Of course, ridership is also down because many office workers are still at home. And people who can afford it have been driving or using ride-hailing apps.

“If they’re out of the COVID mindset and they’re ready to get back on transit, but then the bus they’re waiting for doesn’t come, they’re going to give up pretty soon.”

Mass transit should have the money to hang on through the end of the year. The last stimulus package allocated $30 billion to public transportation networks. And they’ll need that money to recruit. An aging workforce, pandemic layoffs and COVID-related deaths and illnesses have left a lot of transit systems short staffed.