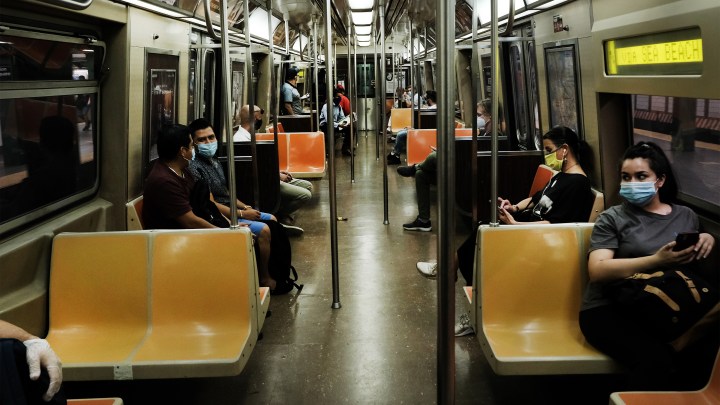 COPY
In Manhattan, the subway serves fewer riders than before the pandemic, and the transit authority is suffering financially. Spencer Platt/Getty Images
COVID-19

In Manhattan, the subway serves fewer riders than before the pandemic, and the transit authority is suffering financially. Spencer Platt/Getty Images
Listen Now

The New York City transit system is the lifeblood that, before the pandemic, carried roughly 10% of the country’s GDP to and from work every day.

The Metropolitan Transportation Authority, the entity that oversees the city’s subway, buses and commuter rail, is asking for a $12 billion federal bailout. Without it, there will be major and immediate cuts, slashing service by 40%.

Ridership has plummeted during the pandemic, down to a quarter of what it used to be. Still, that’s more than a million people on the train every day. Most of them are essential workers. Service cuts would force people to wait longer for trains.

“They have long, punishing commutes already,” said Danny Pearlstein of the Riders Alliance, a transit riders advocacy group. “The idea of making their commutes much longer is devastating.” He said ridership has actually gone up in boroughs outside Manhattan, where many essential workers live.

Cutting service could also increase their chances of catching the virus because fewer trains and buses could mean more crowding and less social distancing.

And all of this changes what the subway represents: a sort of urban equalizer. Because in the “before times,” stockbrokers, teachers and line cooks crammed into the same space for $2.75 a ride. Now the subway could become something that makes life harder for people who can’t afford alternatives.

“So that means picking your child up later from day care or cutting into your exercise time or preparing a healthy dinner,” said Sarah Kaufman at New York University’s Rudin Center for Transportation.

The MTA is also looking at increasing tolls for bridges and tunnels, upping fares and reducing disability ride services.