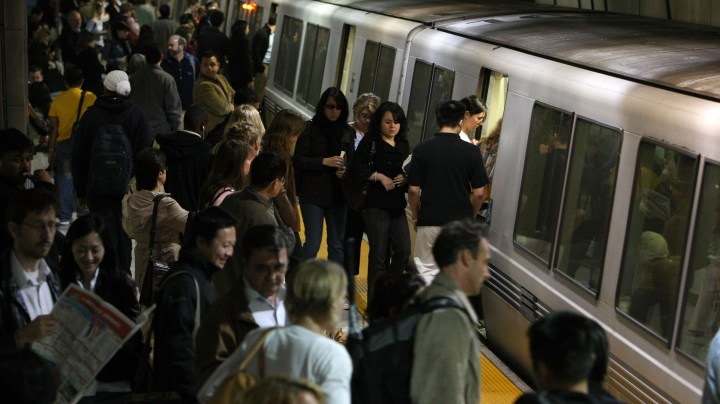 COPY
Passengers at a Bay Area Rapid Transit station in San Francisco. Despite the economy reopening, public transit use is still down dramatically in many metropolitan areas. Justin Sullivan via Getty Images
COVID-19

Passengers at a Bay Area Rapid Transit station in San Francisco. Despite the economy reopening, public transit use is still down dramatically in many metropolitan areas. Justin Sullivan via Getty Images
Listen Now

Home prices in areas where you pretty much need a car to get around have grown twice as fast as in places with access to good public transportation, according to a new report from Redfin.

And fewer people are using public transportation these days. In big cities like New York, Washington, Chicago and San Francisco, ridership is still way down — even though those cities have largely reopened and more people have been vaccinated.

Many public transit agencies are trying to come up with new ways to lure riders back.

Before COVID-19, about 5.5 million people rode the subway in New York City every weekday. On a good day now? That number is close to 2.5 million.

“We’re getting there. But obviously, we’d like to get there a lot faster than we have been,” said Sarah Feinberg, interim president of New York City Transit.

She said the system is trying to encourage more people to get back onto trains and buses with a big marketing campaign “educating our potential returning riders about all that we’re doing to keep them safe.”

NYCT is also offering perks, like “partnering with museums to offer people discounts if they take public transit to get to the museum,” Feinberg said.

Transportation agencies all around the country are trying to find ways big and small to bring riders back, according to Paul Skoutelas, CEO of the American Public Transportation Association.

“Many systems are really doing comprehensive route redesigns, re-imagining their networks, concentrating on making sure they’re servicing the essential workers,” he said.

Many are also looking at pricing, temporarily reducing fares, he said, or — in a few cases — even making rides free. In San Francisco, for example, Bay Area Rapid Transit, or BART, tickets will be half-price for the month of September.

Those kinds of incentives will get some riders back, said Adie Tomer, at the Brookings Institution. But ultimately?

“Transit agencies’ best tool is one they do not control: the reopening of workplaces across the country,” Tomer said. Especially in big-city downtowns, he added.