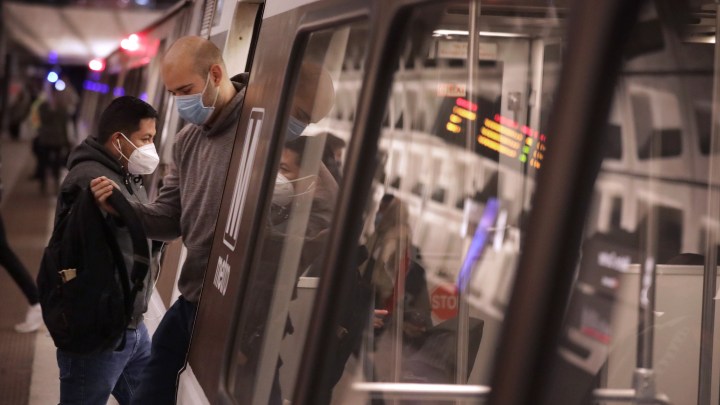 COPY
Washington, D.C.'s Metro rail ridership is down about 86% from 2019. Above, commuters step in and out of a train at the Metro Center station on Dec. 2 in Washington. Chip Somodevilla/Getty Images

Washington, D.C.'s Metro rail ridership is down about 86% from 2019. Above, commuters step in and out of a train at the Metro Center station on Dec. 2 in Washington. Chip Somodevilla/Getty Images
Listen Now

Metro buses in Washington, D.C., started charging for rides again. The fares had been waived since March, letting passengers board through the back doors to keep drivers safe from COVID-19.

Collecting payment again is a sign of how transit systems are just trying to hang on until things go back to normal or, more accurately, the new normal. Things may be different even after the pandemic because people are moving out of cities and office culture is changing. Transit systems may have to adapt.

But passenger levels on mass transportation had been falling long before the pandemic. In the last decade, companies moved away from downtown districts and gas prices fell. Uber and Lyft became Uber and Lyft.

“We know that people that can afford it will opt out if they can,” she said.

Richardson added that many of the budget cuts transit agencies are proposing could create annoyances that would make it harder to coax those riders back.

“We have a chance to build back transit better than before,” she said. “But only if we learn the lessons about why transit ridership was declining.”

One way to keep money and service moving is to rely more on local taxes and tolls, which already make up at least half of most transit budgets. For instance, New York City lawmakers recently proposed a $3 surcharge on package deliveries.

Another way to lure passengers is to invest more in the areas that have held steadier, even during the pandemic. In New York City, ridership on local buses was down about 40%, compared to about an 80% drop on pricier commuter rails that bring workers from the suburbs.

Ian Savage, a transit economist at Northwestern University, said the pandemic is a good reminder about the people whom mass transportation is intended to serve.

“The core of what transit is providing is services to essential workers, and these have primarily always been on bus-based systems,” Savage said.

Experts agree that transit agencies have to do more than just hang in there — their systems need a makeover to get back on track.