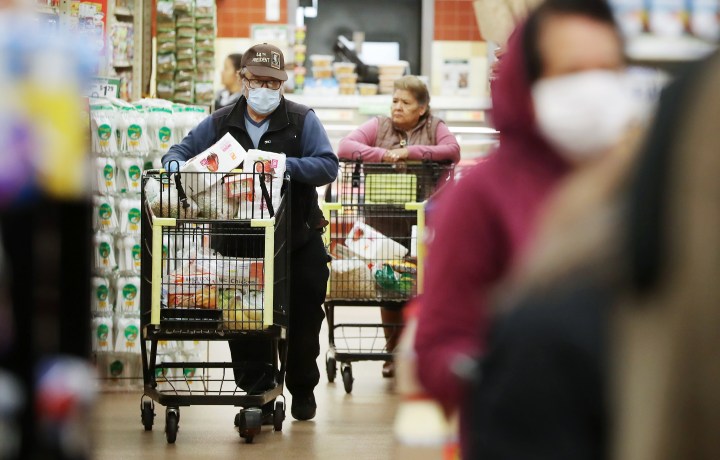 Multiple factors have been pushing up food prices, including the use of corn as fuel, an expert said. Mario Tama/Getty Images
COVID-19

Multiple factors have been pushing up food prices, including the use of corn as fuel, an expert said. Mario Tama/Getty Images

Some shoppers may have noticed that their grocery bills are higher lately.

The latest consumer price index revealed this week that consumer prices in April jumped 4.2% year over year — the largest increase since the Great Recession.

Jayson Lusk, head of the agricultural economics department at Purdue University, said that multiple factors have been pushing up food prices, which began increasing last summer.

He said as China emerged from a recession, it’s been buying more American products, while the U.S. has had adverse weather conditions that limited supplies. He noted that people are driving more, which means corn prices are going up, since roughly 40% of the crop goes into producing ethanol.

Lusk added that the pandemic created workforce challenges and increased costs in the food supply chain. Wages have risen, which you can see in food processing and retail.

“I expect inflation to probably continue for the next half a year, at least,” Lusk said.

He pointed out that food prices disproportionately affect lower-income households.

“Food prices, if you’re a relatively high-income household, is probably not that big a deal to you in the grand scheme of your household expenses. But it is a big deal to lower-income households,” Lusk said. “So I think that’s one kind of consequence that kind of causes inequitable outcomes across the supply chain.”

Mark Kuperberg, an economics professor at Swarthmore College, said he’s not worried about the prices of products like used cars and lumber and thinks they’ll eventually level out.

“You may remember there was no toilet paper,” Kuperberg said. “But it didn’t take very long for the market to readjust and restabilize.”

But as wages rise, he said, inflation may or may not increase.

“Some economists might disagree. My view on what generates inflation is wage inflation above and beyond productivity growth,” he said.

However, Kuperberg added, productivity has been growing faster than labor compensation for decades.

“So what that says is there is the possibility of the wages catching up and not generating price increases,” Kuperberg said. “There’s plenty of room for wages to grow and not outpace labor productivity. And if that happens, there really shouldn’t be any extra inflation. But we just don’t know.”

Inflation has remained relatively stable for a while now, with the rate remaining below 2% for most of the past decade.

There’s also been debate over whether government stimulus, like the $1.9 trillion package President Joe Biden signed in March, could stoke inflation.

“When you have one loaf of bread, and you double the money supply … the price of bread has to go up sooner or later. That, to me, is a real concern,” said Sung Won Sohn, a professor of finance and economics at Loyola Marymount University.

However, central bankers say the U.S. now has better tools to handle inflation.