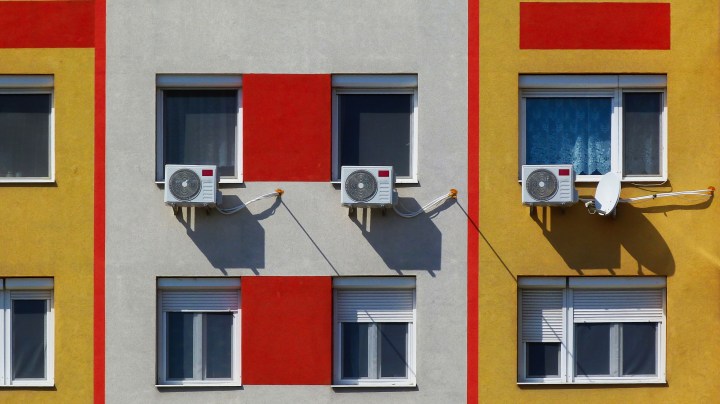 COPY
Hydrofluorocarbons, chemical refrigerants that damage the climate, can be found in common appliances like refrigerators and air conditioners. Istvan Balogh via Getty Images

Hydrofluorocarbons, chemical refrigerants that damage the climate, can be found in common appliances like refrigerators and air conditioners. Istvan Balogh via Getty Images
Listen Now

President Joe Biden has made dealing with climate change a top priority of his administration.

And while Congress and the White House hammer out the way that will show up in the big infrastructure package Biden is on the road promoting this week, there is some low-hanging fruit, some relatively easy fixes that have bipartisan support.

Case in point: Monday, the Environmental Protection Agency released a proposed rule to “phase down” the use of HFCs, or hydrofluorocarbons. Those are chemical refrigerants in products we use every day that do a lot of damage to the climate.

The EPA, in line with a law passed late last year, wants to reduce the production and importation of HFCs by about 85% before 2035.

“These are superpollutants used in refrigeration mostly that can have thousands of times the global warming impact of carbon dioxide,” said Dan Lashof, the U.S. director of the World Resources Institute.

And, Lashof said, citing EPA numbers, “the net benefits of this rule are expected to be about $280 billion through 2050. And that’s mostly from reducing global warming impacts.”

But some of those benefits will come from the improved efficiency of new refrigerants in everyday things.

David Doniger, with the Natural Resources Defense Council, said, “HFCs are in refrigerators, they’re in the air conditioner of your car. They’re in foam installations that you might find in the wall of the house.”

Doniger said most consumers won’t really notice the transition. Kind of like when we phased out chlorofluorocarbons, or CFCs, chemicals that damaged the planet’s ozone layer.

“We’ve gone through two generations of these refrigerant changes already. And you can’t see the difference in the price of a new air conditioner,” he said.

And the industry is on board, even if it would like some tweaks, because the proposed rule allows it to plan.

“There’s been an estimate of 39,000 jobs that’ll be created with the phase down of HFCs,” said Helen Walter-Terrinoni, with the Air-Conditioning, Heating, and Refrigeration Institute.

Because all those old systems will eventually need to be replaced, and someone has to manufacture the next-generation refrigerants. “I think that no matter which side of the coin you look at, it’s kind of a win all around,” Walter-Terrinoni said.

And you know what? These days, let’s just take the win.