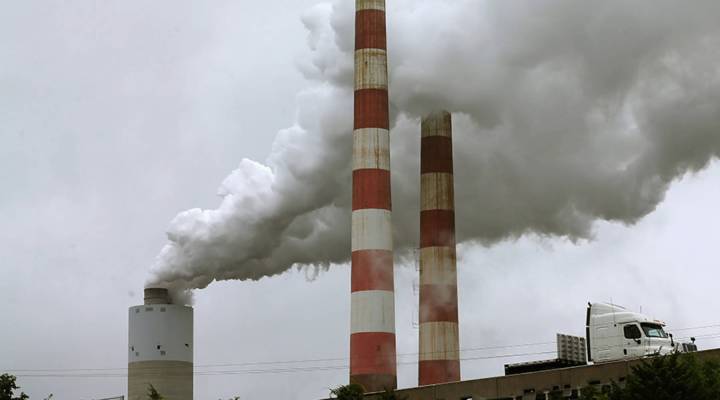 COPY
Emissions spew out of a large stack at the coal-fired Morgantown Generating Station in 2014 in Newburg, Maryland. Mark Wilson/Getty Images

Emissions spew out of a large stack at the coal-fired Morgantown Generating Station in 2014 in Newburg, Maryland. Mark Wilson/Getty Images
Listen Now

President Donald Trump announced he wants to pull the U.S. out of the Paris climate agreement a little over a year ago. Since then, a coalition of leaders from states, cities, businesses and universities called America’s Pledge has been trying to keep the United States on track to meet the Paris accord’s emission targets by its 2025 deadline.

Today, the group issued its latest progress report in conjunction with the opening of the Global Climate Action Summit in San Francisco. The United States originally promised to cut its carbon emissions by more than a quarter from 2005 levels.

“It was always going to be a tough road,” said Austin Brown of the University of California, Davis, Policy Institute for Energy, Environment, and the Economy.

The Trump administration’s efforts haven’t completely derailed the effort, according to Brown.

“The EPA still has a legal obligation to regulate pollution, including greenhouse gases,” he said. “It’s not like those policies are dead and done.”

The United States is on track to cut carbon emissions by 17 percent, according to Paul Bodnar at the Rocky Mountain Institute. And it could hit 24 percent, he said, just shy of the Paris target.

“We were quite surprised to see just how far states, cities and businesses alone can drive the United States without federal help,” Bodnar said.

One of the people pushing changes at the local level is Jim Brainard, Republican mayor of Carmel, Indiana, an Indianapolis suburb.

“We’re building a downtown where people can live and walk and work and play without having to drive anywhere,” the mayor said.

But as rosy as cuts look now, experts say long-term emissions reductions will need buy-in from the federal government.