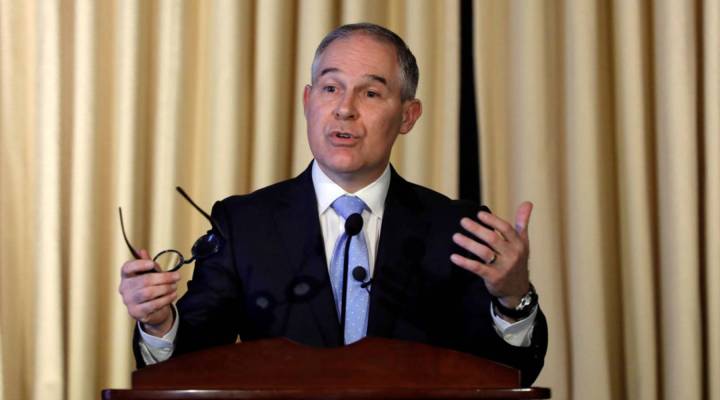 Republicans have been critical of the EPA for what they feel are overly aggressive regulations dating from the 2007 Supreme Court ruling on the Clean Air Act, which gave the EPA the right to regulate greenhouse gases coming from vehicle tailpipes. But cutting back the EPA might be easier said than done, especially considering the under-emphasized economic role EPA grants play in many state and local governments.

Just days into the new presidency, the Trump administration put a freeze on grants and contracts by the EPA. This amounts to about $4 billion annually. That freeze was lifted several days later, but given Trump has previously said he plans to drastically cut the EPA, many scientists and state regulators worry future cuts are basically in the mail.

“A $1 billion budget cut in the first fiscal year coming up is reasonable,” Myron Ebell said in an interview with the Associated Press. Ebell lead the EPA transition team and has since returned to his job at the Competitive Enterprise Institute, a libertarian think tank. Before leaving, Ebell recommended that the EPA’s staff of 15,000 be cut by half and its budget reduced by two-thirds.

“You know the EPA’s work has largely been accomplished in terms of protecting our environment — clean air and clean water,” Ebell said.

Scott Pruitt is a climate-change denier and Oklahoma attorney general who has sued the agency 14 times. His own LinkedIn bio describes him as “a leading advocate against the EPA’s activist agenda.”

“We live in very different times,” said Gretchen Goldman, research director at the Union of Concerned Scientists. “This administration has provided a very chilling environment right off the bat.” Goldman argues the money the EPA spends on grants and contracts is only a fraction of the benefit received by communities around the country.

“Lots of EPA funding goes to state-level programs, superfunds and cleanups, and environmental justice communities or communities at the fence line of industrial facilities,” Goldman said.

About half the EPA’s budget passes through to state and local governments to projects like the one managed by Mark Sulzbach, clean diesel grants manager for the Minnesota Pollution Control Agency.

“We just closed a round of applications for $400,000 in project money to reduce emissions on diesel engines,” he said. All told, he said EPA grants have helped retrofit some 3,500 school buses with carbon dioxide filters. The priority now is garbage trucks, one of the biggest sources of fleet emissions. “They’re big, they’re very thirsty, they go into neighborhoods,” he said.

Besides the threat to individual programs, others worry that an attack on the EPA’s grants might also hurt the economy.

Fawn Sharp is president and CEO at the Quinault Indian Nation, whose reservation sits on 200,000 acres in Washington state, including 30 miles of coast. Sharp said the tribe has a grant in place for $118,000 to fund water quality monitoring and combat invasive species threatening the tribal fishing industry.

“We have thousands of jobs related to the fishing industry, the Dungeness crab industry,” Sharp said. “As well as Lake Quinault, which is the place where our prized blueback sockeye salmon return annually.”

Without EPA support, Sharp said it’s impossible to predict how projects like these get done. Rehabilitating shellfish, salmon and halibut populations does not happen overnight — and relies on years of cooperation between the tribe and EPA.

“Any one of those component pieces, if they go away,” Sharp said, “it’s unthinkable to even try to imagine how we’re going to continue to do the work that we do around water quality on our reservation.”

Requests for comment from the EPA were not returned. But previous statements from agency spokesmen said talk of cuts at this point is still premature.