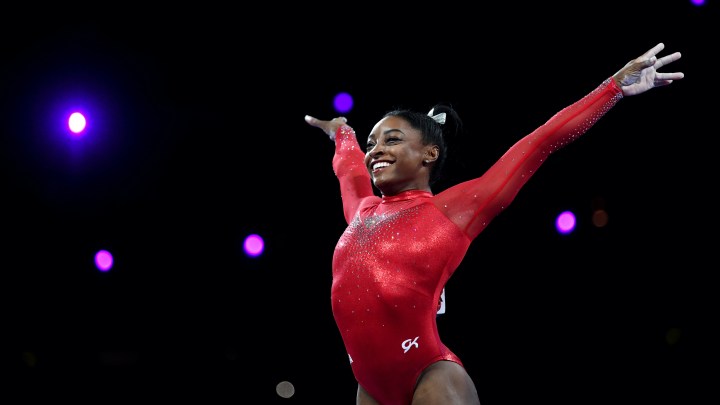 COPY
Athleta provides a platform that aligns with Simone Biles' priorities, like advocating for women in sports. Laurence Griffiths/Getty Images

The most decorated gymnast in the world — that would be Simone Biles — has ended her contract with Nike — the biggest sportswear company in the world — for the smaller, female-focused Athleta, owned by the Gap.

Nike has long been at the top of the heap of sponsorships, so Biles leaving sends a lot of messages about what athletes and brands can do for one another.

When Simone Biles finishes a routine, it gets this kind of response:

“Wow! That is why she is the greatest gymnast of all time! Oh my gosh, oh my gosh, unreal.”

But beyond the beam, Biles has also been outspoken about racism, women in sports and the predatory abuse she and other athletes have experienced.

At Athleta, Biles said she’ll have a platform for her activism.

“It was super important for me to align with a partner who supports me, not just as a gymnast or an athlete, but for the individual that I am and the change that I want to create,” Biles said on Instagram, where she has a few million more followers than Athleta does. At Athleta, Biles will have her own line of performance wear.

Liz Delia, a sports management professor at University of Massachusetts Amherst, said that Biles is the latest top athlete to leave Nike for a smaller brand.

“You’re given more authority and more potential to be creative in what you want that partnership to look like, as opposed to at a place like Nike, you might be seen as one of many,” Delia said.

And in an emailed statement, the company says they’ve always taken great pride in their leadership in supporting women in sports at all levels.

Nike has faced criticism for how it’s treated and compensated its female athletes and employees. Still, according to Americus Reed, a marketing professor at the University of Pennsylvania’s Wharton School, Nike’s not going to hurt too much from losing Biles.

“Every single time Nike has misstepped, they always bounce back because at the end of the day, they have a really, really strong, powerful brand,” he said.

Even so, he said with this departure, the executives at Nike are probably making some internal adjustments.