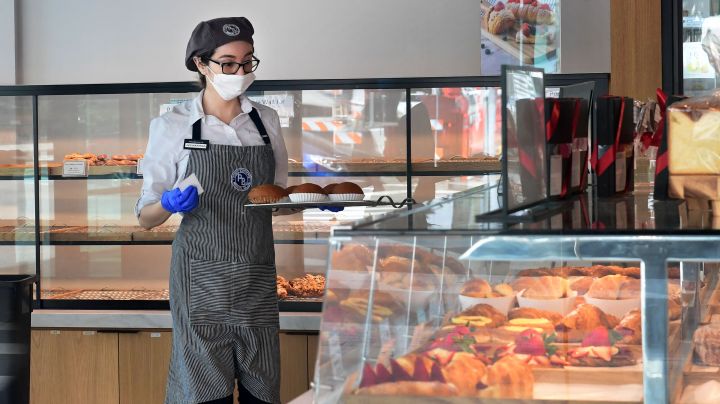 COPY
Some changes businesses made during the pandemic, including in the food industry, will improve operations over the long term. Frederic J. Brown/AFP via Getty Images
Back to Business

Some changes businesses made during the pandemic, including in the food industry, will improve operations over the long term. Frederic J. Brown/AFP via Getty Images
Listen Now

If a small business has survived the pandemic economy so far, there’s a good chance it’s sitting on a fair amount of cash right now. Many businesses’ expenses fell during the pandemic, and the government’s relief programs helped to boost balance sheets.

This year, a lot of small business owners say they’re either planning to spend or already spending that cash on improving their operations. That can mean buying new gear, improving facilities or making other capital expenditures. And every time a company does that, the spending sets off a chain reaction that can assist other small businesses and the people they employ.

Randy George, co-owner of the Red Hen Bakery & Cafe in Vermont, spent the pandemic thinking up ways he could improve how his operation does business.

“There’s all kinds of things that we do, in our daily lives or in our businesses, that are like, ‘Oh wait, we don’t need to be doing things that way anymore,’” George said.

For George’s bakery and cafe, that included slicing meat and cheese manually for sandwiches and putting loaves of bread into an oven by hand. As his business kept humming along during the pandemic, George bought an automatic slicer and a bread-loading machine.

He said the investments will improve productivity as business picks up this year. The automatic bread machine, he said, will be easier on workers’ bodies too.

“You won’t go home feeling like your shoulder got ripped off,” he said.

The automatic bread machine is a $30,000 conveyor belt on a track that rolls back and forth in front of an oven and slides the loaves in. George bought his loader from TMB Baking, a commercial equipment supplier in San Francisco.

“It’s been a swell,” Warwick said. “I wouldn’t call it a tsunami, but you can see the waves coming at you. We’ve been very pleased and grateful that we’ve been seeing an uptick.”

That uptick is giving Warwick’s company more money to spend on inventory. That includes more ovens, dough mixers and machines that divide dough. He’s also been buying more parts for a product he said is a big seller lately: retarder proofers.

“We purchase all the components and do the assembly for those in our facility,” Warwick said. “We also build the controls and wiring.”

Retarder proofers are insulated chambers used to prep dough before baking. They’re part-cooler to slow the yeast down and part-proofer to warm the dough up. Warwick said he’s been selling proofers of all sizes.

“Everything from a cabinet that just takes individual sheet pans to larger chambers that you can roll multiple racks into,” he said.

Warwick’s company purchases the walls, ceilings and doors for those retarder proofers from a manufacturer called Imperial Brown.

Stacey Sewell, Imperial Brown’s director of food service sales, said business has been off the charts.

Scaling up to meet that demand has not been easy. Supplies have been stuck on ships in congested ports. Insulating foam is in short supply because of the freeze in Texas.

Right now, Imperial Brown’s factories in Oregon, Oklahoma and North Carolina are only operating with one shift and barely keeping up. Sewell said lead times have extended from three to five weeks to six to eight weeks across all three factories. And employees have been working long hours.

“That’s not sustainable, to keep everybody working overtime, day after day, week after week, month after month,” she said.

So, Imperial Brown is looking to add roughly 120 people to its 400-person staff. Sewell said she sees that investment the same way Vermont baker Randy George sees his purchase of the bread loader — something that will make the company more productive going forward.