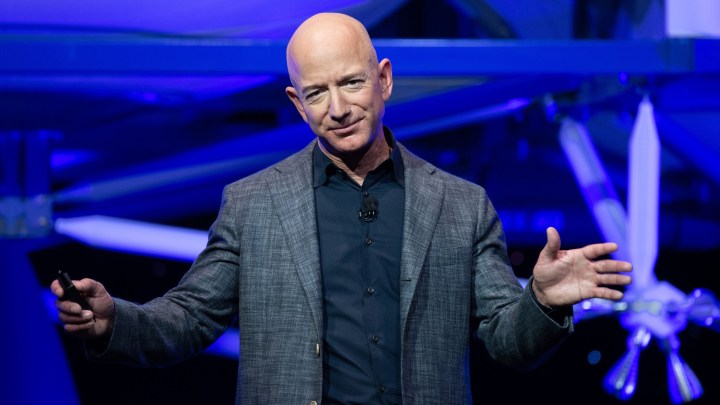 Jeff Bezos, seen in 2019, is currently worth $177 billion. Saul Loeb/AFP via Getty Images

There have been a lot of big numbers in the news lately. Whether it’s a $1.9 trillion relief plan, a $2 trillion infrastructure bill, half a million COVID-19 deaths in the U.S. or 1.5 million cicadas per acre emerging from the ground this spring, big numbers are hard to wrap our heads around.

There are 2,755 billionaires in the world, according to Forbes, who altogether are worth $13.1 trillion. But what does that really mean?

“When you say the median income of a family of four in the United States is something like $50,000 a year — if you were to triple that, it would seem to most people like, ‘My gosh, that’s a lot of money; $150,000 a year!’” he said. Now imagine how many times you would have to multiply that to get to $1 billion. (A lot of times.)

There are viral videos of people trying to demonstrate just exactly how much bigger 1 billion is than 1 million, including this popular rice video that attempts to demonstrate Jeff Bezos’ net worth (which is currently $177 billion).

Another way to think about it, Reich said, is to assume that someone like Jeff Bezos or Bill Gates has worked six days a week for 12 hours a day since they founded their companies, Amazon and Microsoft. Then, calculate how much money they make per hour, and for the wealthiest, per second.

“For the very wealthiest people — this is an old line — if they’re making $100 or $200 per second since they founded their companies, if they see a $500 bill on the ground at the office, it’s literally not worth their time to stoop over and pick it up,” Reich said.

But visualizing or trying to understand “how many” a billion dollars is doesn’t really help us understand any better how much money a billionaire has. Jordan Ellenberg, professor of mathematics at the University of Wisconsin-Madison and author of “Shape: The Hidden Geometry of Information, Biology, Strategy, Democracy, and Everything Else,” said thinking about “how much” a billion dollars is is more useful. Basically, how rich is a billionaire?

“How much wealth has that person amassed relative to the sum total of everybody who works for them?” Ellenberg said. “That’s a ratio that’s much closer to a humanly understandable ratio.”

Should anyone have $1 billion?

Regardless of how you visualize it, a billion is … a lot. It’s 1,000 million. And for whatever reason, we’re bad at distinguishing just how big that is, said Brian Berkey, assistant professor of legal studies and business ethics at the Wharton School.

“There are implications of this for how we think about things like very large amounts of wealth possessed by very small numbers of people,” he said.

“There’s absolutely no reason for anyone to possess anywhere near that kind of wealth,” he said. “I mean, it’s more than any reasonable person could spend in, you know, many lifetimes.”

For decades, there’s been a growing concentration of wealth and a lack of significant growth in wages for regular workers, Berkey said. The wealth gap between America’s richest and poorest more than doubled from 1989 to 2016, according to the Pew Research Center. That’s one reason, among many others, that “increasing taxes on people who have way more than they need … would be a good thing called for as a matter of justice.”

So how did we even get to have people who make nearly $2,500 a second? Berkey said it’s due to public policy, which is disproportionately influenced by the wealthy.

Doing something of consequence

“I think, in a way for many people, the pursuit of more and more wealth has come to function as a goal in itself, which is … frankly pathological,” Berkey said. “Money is a means to buy stuff that can improve your life. That’s all it is. But in our society, it’s come to be associated with this kind of competition for status.”

The ultrawealthy have an obligation to give away resources when they have well beyond what they need to live comfortably, Berkey said. In other words: charitable giving. But a few problems arise when the ultrawealthy give charitably.

First, the wealthy tend to give to the wealthy. “Wealthy people tend to prefer to give their money [to] rich places like museums, medical centers and universities, not so often to meeting basic needs or the global poor,” Reich said.

And because of the nature of extreme wealth — wealth begets wealth — you can give away billions and end up richer than you were before. MacKenzie Scott, Jeff Bezos’ ex-wife, gave away nearly $6 billion in 2020. Yet she ended the year nearly 50% richer due to her Amazon stock skyrocketing during the pandemic.

So what is something of consequence, as our listener asks, that billionaires could do?

They could “speak publicly about how you don’t deserve to have a billion dollars, that it’s a function of a combination of luck and policies that have unfairly favored wealth accumulation,” Reich said. “No one can be said to morally deserve or have earned billions of dollars.

“Secondly, you can say that because the money isn’t morally deserved, you should find ways to return it to the society that permitted you to accumulate it,” Reich continued. But looking at Scott, who gave away billions and became wealthier, “that’s a sign of just how broken the policies are.”

Therefore, billionaires should be pushing for a more equitable tax policy.

“And to do so by saying, ‘This is what fairness requires. We have benefited from unfair wealth accumulation.’”