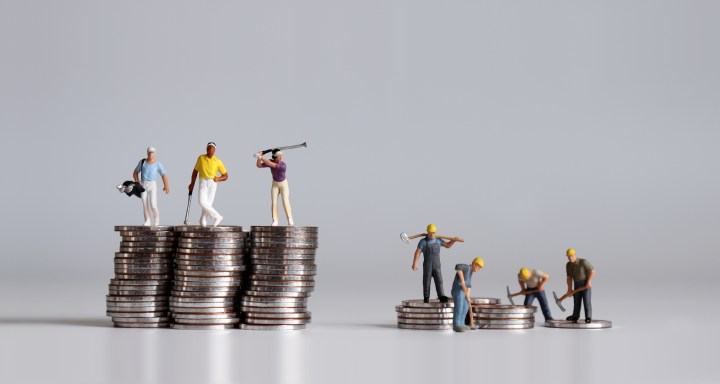 COPY
The gulf between wealth and poverty has gotten much wider during the pandemic, according to an Oxfam report. hyejin kang via Getty Images

The gulf between wealth and poverty has gotten much wider during the pandemic, according to an Oxfam report. hyejin kang via Getty Images
Listen Now

A new report out today spotlights how inequality has only gotten worse during the pandemic.

According to Oxfam, a new billionaire is created every 26 hours. Meanwhile, inequality exacerbated by the pandemic contributes to the death of one person every four seconds, the report said.

One policy solution it floats is one you’re likely familiar with: Hiking taxes on the rich.

It’s hard to overstate just how much richer the rich have become during the pandemic.

Abby Maxman, the president and CEO of Oxfam America, said the world has never seen disparities grow at these levels.

“It’s really off the charts. We know that COVID-19 has really been a boon for billionaires. We know collectively, the 10 richest men have more than doubled their fortunes during the pandemic, while the majority of people are now poorer,” she said.

She estimates more than 160 million people have been pushed into poverty. This growing gap manifests in outcomes like more hunger and lack of access to health care – globally and here in the U.S.

However, Maxman said there are solutions.

“Governments have the ability to end this, we can tax the super-rich.”

And Oxfam proposes doing that not just country by country, but internationally. University of Connecticut Professor Steve Utke said on paper, that makes sense.

“Unless you can put a wealth tax on everything, essentially, globally, where there’s no way to globally avoid that, you’re going to end up with economic distortions,” he said.

Meaning, billionaires moving assets around the world to avoid taxation.

Some countries have tried, before giving up on the idea. Nevertheless, as challenging as wealth taxes are to implement, they hold perpetual appeal among the public, Utke said.

“Because you just say, hey, there’s all these billionaires … let’s take some of their money, right?” he said.

What does keep him up at night is what’s happened to people at the bottom of the socio-economic ladder during the pandemic, including some of his own students.

“When it started, they would say things like ‘I’m homeless now … You know, my parents are out of a job.’ It was very, very difficult to hear that.’” he said.

And the problem persists, even as the hard numbers on just how severe inequality has grown continue to trickle in.