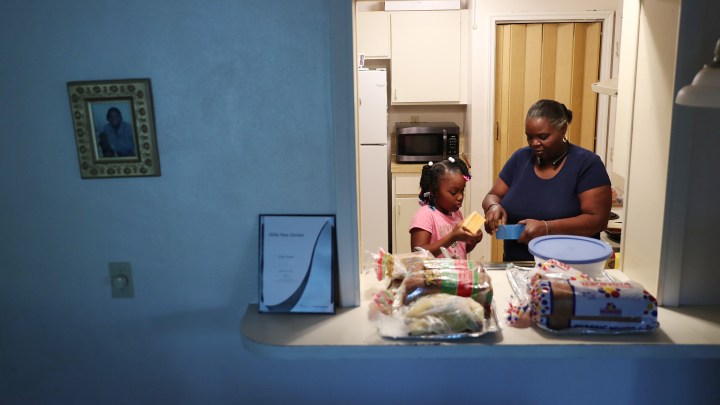 COPY
A woman makes grilled cheese with her granddaughter after being laid off from her job early in the pandemic. Joe Raedle/Getty Images
COVID-19

A woman makes grilled cheese with her granddaughter after being laid off from her job early in the pandemic. Joe Raedle/Getty Images
Listen Now

An average single white man under the age of 35 is 224 times as wealthy as the average single Black woman the same age, according to a new report from the Brookings Institution’s Hamilton Project.

The report also found that going into the pandemic recession, Black households held 4% of household wealth in America even though they’re a little over 13% of the population.

White households — 60% of the population — held 84% of household wealth.

What do those numbers mean for people of color as they struggle through this pandemic economy?

Gary Hoover is a Black man whose father raised his family and worked in a factory in Milwaukee. When his father died in 2008, Hoover said, there was a lot of worry in the family.

“How we were going to be able to handle expenses?” he said, like clearing his dad’s debts and paying for the funeral.

Now, Hoover’s an economist and department chair at the University of Oklahoma.

“It just so happened that, you know, me being a university professor, I was able to cover those final expenses and to take care of some outstanding debt that he left,” he said.

But he knows many Black families don’t have someone like him to step in.

Kristen Broady at the Brookings Institution’s Hamilton Project has been looking at household wealth by race and how disparities make families more resilient or precarious in this pandemic.

She said white households inherit more, more often. And “white people are more likely to own homes and their houses are likely to be worth more,” Broady said.

“Given that Blacks started out with so fewer assets available to them in their wealth portfolio, it’s going to take them even longer to recover, therefore exacerbating the already existing problem,” Hoover added.

Which is exactly what happened after the Great Recession.