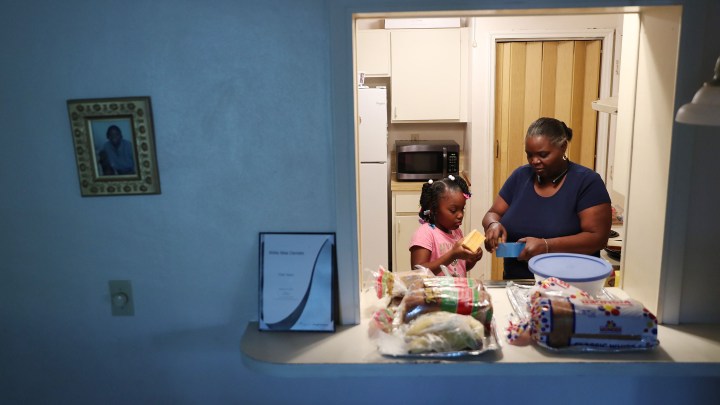 COPY
Black households are more likely to have just a single wage-earner to depend on, says Valerie Wilson at the Economic Policy Institute. Joe Raedle/Getty Images
COVID-19

Black households are more likely to have just a single wage-earner to depend on, says Valerie Wilson at the Economic Policy Institute. Joe Raedle/Getty Images
Listen Now

The Labor Department’s jobs report for May shows the unemployment rate fell to 13.3%, with another 2.5 million workers losing their jobs last month.

Historically, through good times and bad, Black workers have suffered higher unemployment than white workers — typically, about twice as high.

And layoffs in the pandemic have hit hard in service occupations where Black workers are heavily represented: hospitality, food service, health care and retail.

Meanwhile, according to the Labor Department, only 20% of Black employees have jobs that allow them to work from home, compared to 30% of white employees.

Valerie Wilson at the Economic Policy Institute says those are most likely professional, office-type jobs.

“Given occupational segregation, African Americans are less likely to be in those higher-paid occupations,” Wilson said. “That in large part accounts for the disparity in the share of African American workers able to work remotely during this time.”

She also says Black households are more likely to have just a single wage-earner to depend on.

“When you lose your job, all of the resources available to that household go,” Wilson said. “It’s unlikely anyone who loses a job now will be able to quickly find another one.”

Meanwhile, African American households went into this crisis with less to fall back on.

Economist Gary Hoover at the University of Oklahoma estimates the median wealth of white households is five times or more higher than that of Black households.

And, after the Great Recession, “[white people] recovered faster, were able then to increase assets and savings, that in the current crisis will help them fare much better,” Hoover said. “[Black people] being in that precarious spot with much lower wealth are going to have a difficult time if this pandemic goes on much longer.”

According to the Economic Policy Institute, Black workers earn about 20% less per hour than white workers, whether they have a high school diploma, bachelor’s degree or advanced degree.

Why are unemployment rates higher for Black and Hispanic workers?