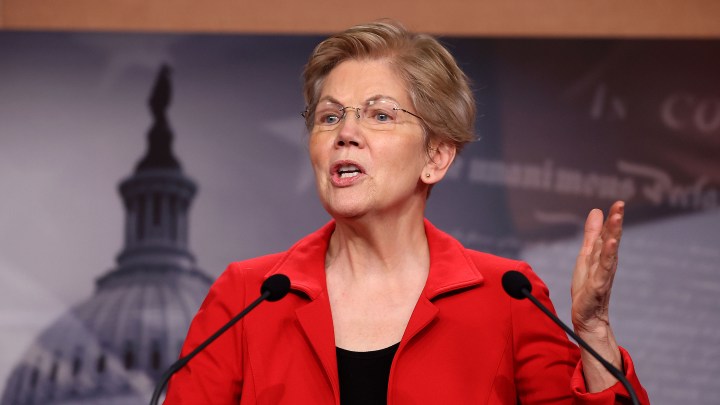 COPY
"This going to be good for our economy," Warren, D-Mass., said of the wealth tax legislation she introduced last week. Chip Somodevilla/Getty Images

"This going to be good for our economy," Warren, D-Mass., said of the wealth tax legislation she introduced last week. Chip Somodevilla/Getty Images
Listen Now

In 2020, while millions of Americans struggled with job loss and economic turmoil due to the coronavirus pandemic, the richest 100 Americans’ fortunes grew by $598 billion. This is the backdrop for the wealth tax introduced by Sen. Elizabeth Warren, D-Mass., last week.

The Ultra-Millionaire Tax Act, co-sponsored in the House by Rep. Pramila Jayapal, D-Wash., and Brendan Boyle, D-Pa., would impose a 2% tax on individual net worth above $50 million and an additional 1% surtax on net worth above $1 billion. Payments would begin in 2023 based on wealth in 2022. University of California, Berkeley economists Emmanuel Saez and Gabriel Zucman estimate the bill would raise $3 trillion over the first 10 years, and would cover around 100,000 families.

“Keep in mind that the 2 cent wealth tax is about putting that money where it’ll really go to work,” Warren told “Marketplace Morning Report” host David Brancaccio. “It’s about money we can put straight back into this economy where it will build real opportunity, where it will give more of our children, more of our young people, a real chance to get started in this economy.”

Polling has repeatedly found broad approval among voters for a wealth tax on the very rich, including the approval of more than half of Republicans. But critics say the proposal would be difficult to enforce — a concern shared by Treasury Secretary Janet Yellen — and might dampen economic growth.

To address tax avoidance, Warren said the bill would nearly double the budget of the IRS and implement a 30% audit rate.

“Is the response just to say, ‘We shouldn’t ask them to pay a fair share because they’re just all a bunch of cheaters’? My response to that is let’s hire more IRS agents, and let’s make them follow the law the way that middle-class families have been following the law all along,” Warren said.

The following is an edited transcript of her conversation with Brancaccio.

David Brancaccio: So what’s the estimate — maybe 1 in 1,000 families would be affected by a tax like this? And so I’m thinking since 999 families in 1,000 won’t pay higher taxes, do you think this will just slide into law easy peasy?

Elizabeth Warren: You know, in a democracy, if everybody’s voice were equally loud, the answer is we’d have already done a wealth tax in America, because this does affect only the top one-tenth of 1%. The problem, of course, is that the billionaires and super millionaires talk a lot louder in Washington than everyone else. They make a lot more campaign contributions. They hire a lot more lobbyists. They finance a lot more think tanks. And they make it really tough for some folks in Washington to think about a 2 cent wealth tax on their great fortunes.

Brancaccio: Economists have long pointed to the following issue with raising taxes for rich people: Affluent people have very accomplished accountants and lawyers, and the more you raise their taxes, the more incentive they have to come up with creative ways to get out of paying.

Warren: So let me give you two answers here, if I can. The first answer is we know this, so we stitched up the loopholes. The way we designed the system is it will be for wealth wherever it is held — so it doesn’t do any good to move it to the Cayman Islands — and in whatever form it is held. So you can hold it in stock, you can hold it in real estate or you can hold it in race horses. We also said we’re not going to try to do the, relatively speaking, smaller stuff: not value assets under $50,000. So all of the calculations were based on being able to get at the big stuff.

And, keep in mind, the big stuff is really pretty visible. That wealth is held in stock — stock in Amazon, stock in Facebook, that’s where huge amounts of it are — and it’s held in real estate, which gets valued every single year for real estate property taxes. And then you’ve got some diamonds and some Rembrandts and some other pieces. So we deliberately built into the system that we’re going to nearly double the budget of the IRS, and we’re going to do a 30% audit rate on this top one-tenth of 1%.

We even then knocked off 15% of the revenue projections, just saying, “Maybe these guys will cheat.” But we feel pretty confident this thing is really going to raise about $3 trillion over 10 years.

But can I give you a second answer to your question? When people say to me, “Look, folks cheat. Rich folks cheat even more.” Then I really want to say, “Really?” Is the response just to say, “You know what? We should just give up on trying to tax these people. We shouldn’t ask them to pay a fair share, because they’re just all a bunch of cheaters”? My response to that is let’s hire more IRS agents, and let’s make them follow the law the way that middle-class families have been following the law all along.

Brancaccio: I just want to be clear: Some of the money generated by this new tax — a lot would go to infrastructure and all sorts of things — but might be recycled back to beefing up the IRS so that they could go after the cheats?

Warren: Exactly that. The $3 trillion is net of having increased the IRS budget by $100 billion. And we built right into the statute that, effectively, every third year, the families that are subject to the wealth tax would be audited. And we’d have good, smart people to do that because we’re putting the resources in to make it happen. And we can still produce $3 trillion. That’s a lot of money.

Brancaccio: One criticism here: I saw the Tax Foundation had this beef that [the tax] lops a certain amount off economic output, off of growth. It depends on the plan, but I’ve seen 0.3%, 0.4%.

Warren: I’m sorry, really? By charging a 2 cent wealth tax on the great fortunes — the fortunes that are already growing at 6%, 8%, 10% a year in normal times, the fortunes that grew last year by 40% (that’s how much richer billionaires are right now than they were a year ago) — the Tax Foundation is worried that we’re somehow going to crimp growth?

Keep in mind that the 2 cent wealth tax is about putting that money where it’ll really go to work. It’s about funding universal childcare and universal pre-K. It’s about quadrupling the money that we put into Title I schools. It’s about money that we can put into infrastructure. It’s about money we can put straight back into this economy where it will build real opportunity, where it will give more of our children, more of our young people, a real chance to get started in this economy. This is going to be good for our economy.

Getting it through Congress

Brancaccio: Do you think it’s really going to move ahead? I mean, you’re in that Senate, it’s so close. And even President [Joe] Biden hasn’t said if he’s into this or not.