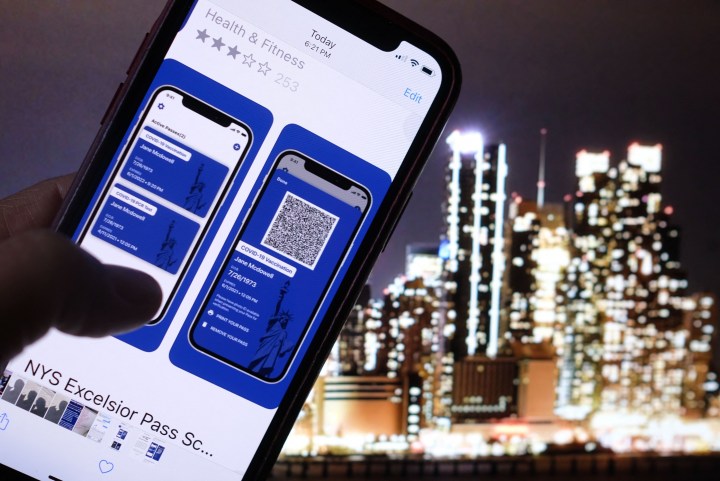 As more Americans get vaccinated against COVID-19 and the economy begins reopening, some businesses are requiring proof of vaccination to enter their premises.

After your first vaccine, you receive a card issued by the Centers for Disease Control and Prevention. The Miami Heat basketball team, for example, is asking some of its fans to show the card to get certain seats at games.

On Thursday, the Heat’s arena set up two vaccinated sections for attendees who had their cards, allowing fans to sit closer together, The Wall Street Journal reported. New York’s Madison Square Garden is requiring proof of either vaccination or a negative PCR or antigen test taken within a specific time frame.

Sophisticated, high-tech options are rolling out. The Commons Project, for example, has developed the CommonPass — an app that shows you were vaccinated or your negative test result. Some airlines have launched trials of the platform. New York state has debuted the Excelsior Pass, which provides the same information. “Think of it as a mobile airline boarding pass,” the state’s website said.

The concept of a vaccine passport has raised ethical questions about data privacy and potential discrimination against the unvaccinated. However, legal experts say businesses have the right to deny entrance to those who can’t show proof.

“Right now, there’d be nothing to prevent that, unless there was a specific law in a state, which doesn’t exist yet,” said Robert I. Field, a law and public health professor at Drexel University. “Proof of vaccination would be an indication that you’re low risk to other customers or to the employees of the business — and it would be a reasonable step.”

Dane S. Ciolino, a professor at Loyola University New Orleans College of Law, noted that a property owner can decide which people they let in as long as they’re not excluding them based on categories like race or religion. “Unvaccinated people are not a protected class,” Ciolino said.

However, Republican governors in states such as Texas and Florida have signed executive orders attempting to prevent businesses from demanding proof.

Texas’ order says no government agency or private entity receiving government funds can mandate that an individual provide proof of a COVID-19 vaccination, although it exempts nursing homes and assisted-living facilities. Meanwhile, Florida’s order says more broadly that businesses in the state cannot impose these requirements.

“There is no actual punishment, there are no fines and there is certainly no imprisonment,” he  said. “The only enforcement mechanism is that they can limit state funding for those organizations if they receive subsidies, loans or other kinds of state financial assistance.”

Even people who are medically exempt from vaccination would not have a case against a business that kept them out, according to law professor Patricia Kuszler at the University of Washington.

“I don’t think going to a basketball game is a fundamental right,” Kuszler said.

On the federal level, there will be no vaccination mandate, nor a requirement to have a vaccine passport, White House press secretary Jen Psaki said Tuesday. However, the Biden administration is working with U.S. airlines to provide guidance for vaccine passports, which could boost travel.

The COVID-19 crisis devastated the airline industry, with companies furloughing or laying off tens of thousands of employees over the past year. In April 2020, Delta and United posted their first quarterly losses in more than five years.

However, the country’s overall job numbers are beginning to recover, likely due in part to increasing vaccinations.

Early last month, the University of Pennsylvania’s Penn Wharton Budget Model projected that doubling vaccinations to 3 million a day would add 2 million jobs to the economy and increase real gross domestic product by about 1% over the summer.

These numbers came on the heels of a strong employment report. In March, 916,000 jobs were added to the economy, while the unemployment rate declined to 6% — the lowest level since the pandemic began. Last spring, the jobless rate hit 14.8%.

So, could a vaccine passport system accelerate the rebound that’s underway?

For schools, health care facilities and international travel, proof of immunization is already required in some cases, said Alexander Arnon, the PWBM’s associate director of policy analysis. “That’s sort of an essential part of economic recovery,” he added.

But Arnon doesn’t think passports would make an especially big difference for restaurants or movie theaters.

“People who are vaccinated, especially in places where most other people are vaccinated, are going to feel pretty confident just going out, even if there’s not a passport system in place,” Arnon said.

Field, of Drexel University, expects the controversy over vaccine passports to ease as more Americans receive their vaccinations. As that occurs, fewer people will be concerned about contracting the virus, and fewer will be left out for not showing proof.

Some parts of the country, like California, have announced they’re fully reopening due to sufficient vaccine supplies and low COVID-19 hospitalization figures.