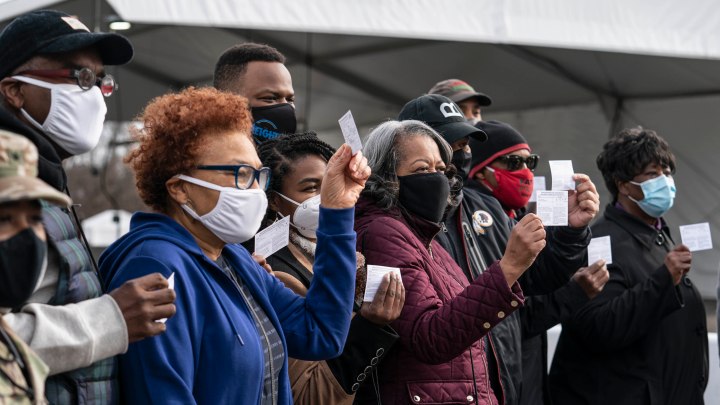 COPY
You might want to keep your COVID-19 vaccination record handy. Workplaces have an interest in their employees being immunized. Sarah Silbiger/Getty Images
Workplace Culture

You might want to keep your COVID-19 vaccination record handy. Workplaces have an interest in their employees being immunized. Sarah Silbiger/Getty Images
Listen Now

The pandemic is opening a new political fault line around the issues of mandatory vaccinations and vaccine passports — digital proof of a COVID-19 shot.

They could, in theory, be required to travel, attend big events or go back into the workplace.

Last month, New York became the first state to launch one of those systems. Meanwhile, the governors of Florida and Texas issued executive orders limiting their use. And legislatures in several other states are considering prohibiting employers from mandating vaccinations.

Getting people on board with vaccination at work is a win-win, according to Dr. Scott Ratzan, who heads a vaccine literacy initiative at City University of New York. Employers want to get back to business as safely as possible, and they could advance broader public health goals.

“The best thing we could get to is 80%-plus of the population being vaccinated, and employers are amongst the most trusted sources of information,” Ratzan said.

Public enthusiasm for vaccination in the U.S. has increased over time, but there’s a slice of the population that’s still resistant, said Liz Hamel, with the Kaiser Family Foundation. “There are a couple of groups that stand out for having a higher share of people saying they’re definitely not going to get the vaccine. That’s been Republicans and white evangelical Christians.”

About three in 10 Republicans say they won’t get vaccinated, and that political divide may influence state policies over workplace vaccination requirements.

“There will probably be a handful of states that do enact a no-vaccine-for-employers piece of legislation, but I don’t think we’ll see it widespread,” said Lowell Pearson, a managing partner with the law firm Husch Blackwell, which has been tracking state-level employer vaccination policies.

Though nearly half of state legislatures proposed such a ban, he said they’ll likely move forward in only about 10 heavily Republican states.

So far, few employers have publicly announced plans to mandate vaccination outside of long-term care or health care facilities, but that may be because vaccines haven’t been widely available in most places, said Jill Chapman, with human resources firm Insperity. “I know that these conversations are being had up and down the chain within an organization across the country. But again, it’s a tightrope, right?”

She said organizations are looking at multiple ways to incentivize vaccination, like bonuses or time off.