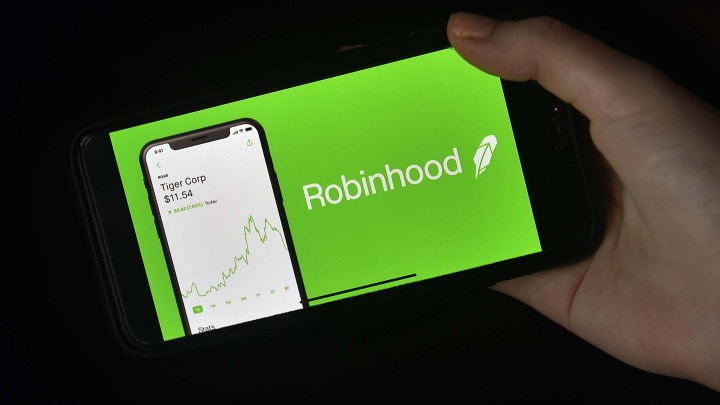 COPY
If buying stock on Robinhood is free, how does the company make its money? Olivier Douliery/AFP via Getty Images

If buying stock on Robinhood is free, how does the company make its money? Olivier Douliery/AFP via Getty Images
Listen Now

Robinhood, the company popular with entry-level investors, has filed the confidential paperwork with regulators to eventually sell its own stock to the public. No word yet on when an IPO would happen for the company, which has been at the center of a battle between online retail investors and institutional investors over companies such as GameStop and AMC Entertainment.

When Reddit fueled a buying frenzy of those shares this year, many bought using the Robinhood app for free. If it’s free, how does Robinhood make its money, and what are risks for those who might buy an eventual Robinhood share?

David Brancaccio: Riddle me this: If it’s free to trade stocks, options, etc. on Robinhood for people like you and me, how does Robinhood make its money?

Erik Gordon: If I place an order with Robinhood to sell 100 shares of IBM, Robinhood turns around and sells that order to a market maker who takes the other side of the trade and makes money from the trade. That market maker is the one who pays Robinhood. It’s called paying for order flow.

Brancaccio: Now, you hope that this market maker, this third party, gives the Robinhood client the best deal. And that’s been at issue. Robinhood paid a $65 million fine after the SEC accused it of misleading customers about this system, how it explains how it makes money.

Gordon: Yeah, and there are two stories about that. You have to wonder whether you’re getting the best price. How can these market makers afford to pay for order flow if they’re giving you the best price? But technically, they might be giving you as good a price as anybody else, because they’re not making their money by chiseling you on the price. They’re making money because you, as a Robinhood person, are likely to be an uninformed seller or buyer. And it reduces the risk of the market maker to have some of the people that trades with be uninformed people. Because on the other side, they’re dealing with really sophisticated hedge fund people.

So they might be paying Robinhood just to lay off a little of their own risk. The risk with this complicated pay-for-order-flow model is that if the government decides that paying for order flow should be restricted in some way, Robinhood’s revenue model falls apart.

Brancaccio: The revenue model falls apart, which is something if you’re thinking of buying this eventual new Robinhood stock, you have to factor into your thinking.

Gordon: Yeah, that could be a big problem if you buy stock of a company that loses its way of making revenue.

Brancaccio: And regulators will continue to review how Robinhood does its business after it’s publicly traded. And you can’t rule out more regulation, I suppose.

Gordon: That’s a risk. In fact, the SEC, and the industry self-regulatory body, and several states, are looking into the question as we speak.

Brancaccio: So, when this new stock hits the market, what do you think? Some interest?