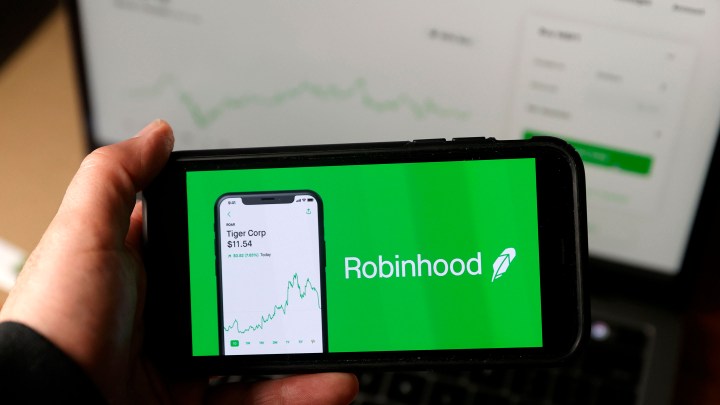 COPY
A number of lawmakers are calling for regulation of apps like Robinhood, including Rep. Ro Khanna. "Technology is not sufficient without proper regulations," he says. Justin Sullivan/Getty Images

A number of lawmakers are calling for regulation of apps like Robinhood, including Rep. Ro Khanna. "Technology is not sufficient without proper regulations," he says. Justin Sullivan/Getty Images
Listen Now

The brokerage app Robinhood is in hot water with regulators. On Thursday, the Securities and Exchange Commission announced a $65 millio settlement with Robinhood over charges that it failed to disclose its relationships with firms it uses to process trades.

A day earlier, Massachusetts launched its own complaint about Robinhood, arguing that it encourages inexperienced investors to engage in risky trading.

Robinhood lets users make trades without charging commissions. It’s simple to link it to a bank account, and it’s designed to be used on smartphones.

Making investing easy can be a good thing because it gives more access to people who might not otherwise have it, said Tyrone Ross, the CEO of the investment platform Onramp Invest.

“Fifty percent of the country don’t own stock,” Ross said. “If you don’t own equities, and you’re not exposed to capital markets and all that comes along with that, then how do you build any type of financial freedom or, ultimately, wealth for your family?”

But Massachusetts regulators say the app encourages users to trade a lot “and entice[s] continuous and repetitive use of its trading application,” which can be risky.

Ben Carlson, director of institutional asset management at Ritholtz Wealth Management uses the app to invest in cryptocurrency. He said it feels like the app rewards him for every transaction.

“They have this confetti when you make a trade and it makes you feel good. It kind of does feel like a video game,” Carlson said.

The Massachusetts complaint also charges that the app uses “strategies such as gamification” and “aggressive tactics to attract new, often inexperienced, investors,” making it too easy for novice traders to buy risky stock options and other highly leveraged positions.

“Having that leverage in play, when it goes to the upside it can feel great, but to the downside, it can wipe you out pretty quickly,” Carlson said. “So it is something that people need to have some education on if they’re going to use that stuff.”

Robinhood issued a statement that said it disagrees with the allegations. It also said that it has added safeguards and education to its options offering.