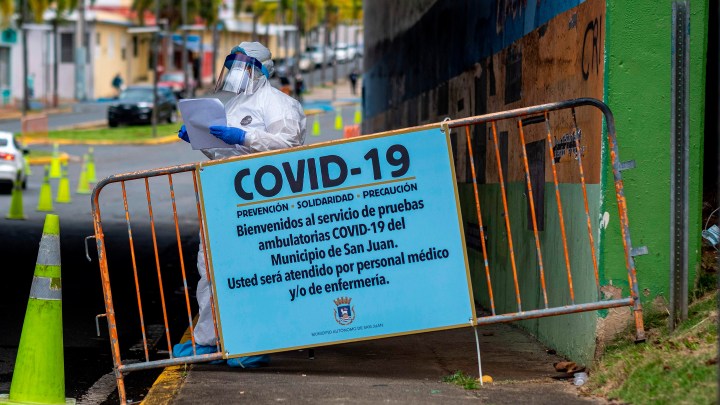 It’s winter in Puerto Rico — warm and sunny. And here on the west coast in Isabela, just a couple hours from San Juan, the capital, winter is surfing season. Instructor Joel Torres is going over the basics with three beginners on the sand of Jobos Beach.

Everyone pops up to their feet, a little wobbly on the first try. They practice that move over and over until the only thing left is to do it for real. So they wax their boards, put on their leg straps and head across the sand into the crystal blue waves.

Juan Ashton owns the surf school with his wife, Hannah Griek. He’s a former professional surfer and a representative for Volcom, which makes clothing for board sports. He convinced the brand to let him use its name for the business. Volcom Presents Tropical Premium Surf School opened in August 2017 — right in time for Hurricane Maria to rip Jobos Beach apart.

“Oh, my God, it was totally torn up. There was hardly any sand. It was, like, really rocky,” Ashton said. Most businesses on the beach were destroyed.

Maria devastated Puerto Rico, causing billions of dollars in property damage. It flattened neighborhoods, crippled the power grid and created a major humanitarian crisis, the effects of which are still visible in some places.

The surf school’s only infrastructure was a tent, so no big loss there. And the hurricane meant Ashton got a late start building his business, but he knows it could have been a lot worse. The same is true with the pandemic; in fact, business is booming.

“The parents were like goin’ crazy because they’re like, ‘Juan and Hannah, I got this kid seven days a week in the house. Help me,'” he said. Ashton’s biggest headache now is getting his surfing instructors to pick up extra hours because they like to surf, too.

Tourism makes up about 10% of the island’s gross domestic product, but it’s one of Isabela’s main industries, and that’s not just because of its beaches. It also has mountains, caves and forests.

Tropical Trail Rides has been taking horseback riders through that terrain for 26 years. And as business owners, Craig and Michelle Barker have been through a lot.

“So much politically, economically,” said Craig Barker. “Obviously, Maria was the most impactful thing of my life. Ever. That was the hardest, hardest thing I’ve ever done in my life, by far.”

Everyone here has a Maria story. Barker’s includes 50 horses, no water for two months and no electricity for six. He said hurricanes, earthquakes and the weak infrastructure are all part of doing business in an economy shaped by disaster — and now COVID-19.

“All of this stuff has been tough. It’ll tear you apart if you can’t endure it. You have to be super, super tough,” he said.

Barker got a small Paycheck Protection Program loan, and his business is outdoors, so his numbers are down only a little. Almost everything happens outdoors in Puerto Rico, really. But that’s not enough to save every business.

Javier Rodriguez Malpica owns a bar called Tu Mojito. His speciality, of course, is mojitos in flavors like passion fruit, dragonberry and sesame. The typical mojito is 32 ounces, the same size as a Big Gulp, for $8.

“I’m a bartender. I ask everybody to taste it. Check it out if you want more alcohol. You get drunk, I’m happy,” he laughs.

Bacardi rum is distilled in Puerto Rico, and Rodriguez Malpica said he’s the 16th biggest buyer on the island, including hotels and Costco. When he lost power during Hurricane Maria, Bacardi sent him a generator so he could make ice. People from across the island came to his bar for a break.

Now, the bar has 20,000 followers on Facebook; the population of Isabela is about 40,000. But popularity can’t help him this time. The government has shut down bars during the pandemic. He’s still running a small restaurant because they can stay open. But “the money that I make today, I pay something. But none in the bank. And that’s something I’m scared of right now. Lose everything,” he said.

He drained his savings to convert his bar into a second restaurant, but he’s been waiting months for an inspection. He thinks he won’t make it past summer.

“Damn, COVID,” he sighs. “I told my wife this is my all in. This is my last chance. I put everything.”